I’ve always wanted to go on long road trips, but with both Jo and me working, trying to find a contiguous block of holiday has been rather difficult. With me taking a break and Eid holiday coming during middle of the week, we got a chance to do our road trip. Part 3 continues..

Waking up beach side in Malpe, I was more excited than ever - we had a long day coming up.Kavimane, Kavishaila and more importantly, I was really excited about the ride through Agumbe. Agumbe  is called as “The Cherrapunji of the South” due to heavy rainfall it receives, and the ghat roads leading to it are rather infamous. Plus driving through it in July meant that we’d be driving during the wettest month of the year and I wondered what would be in store. 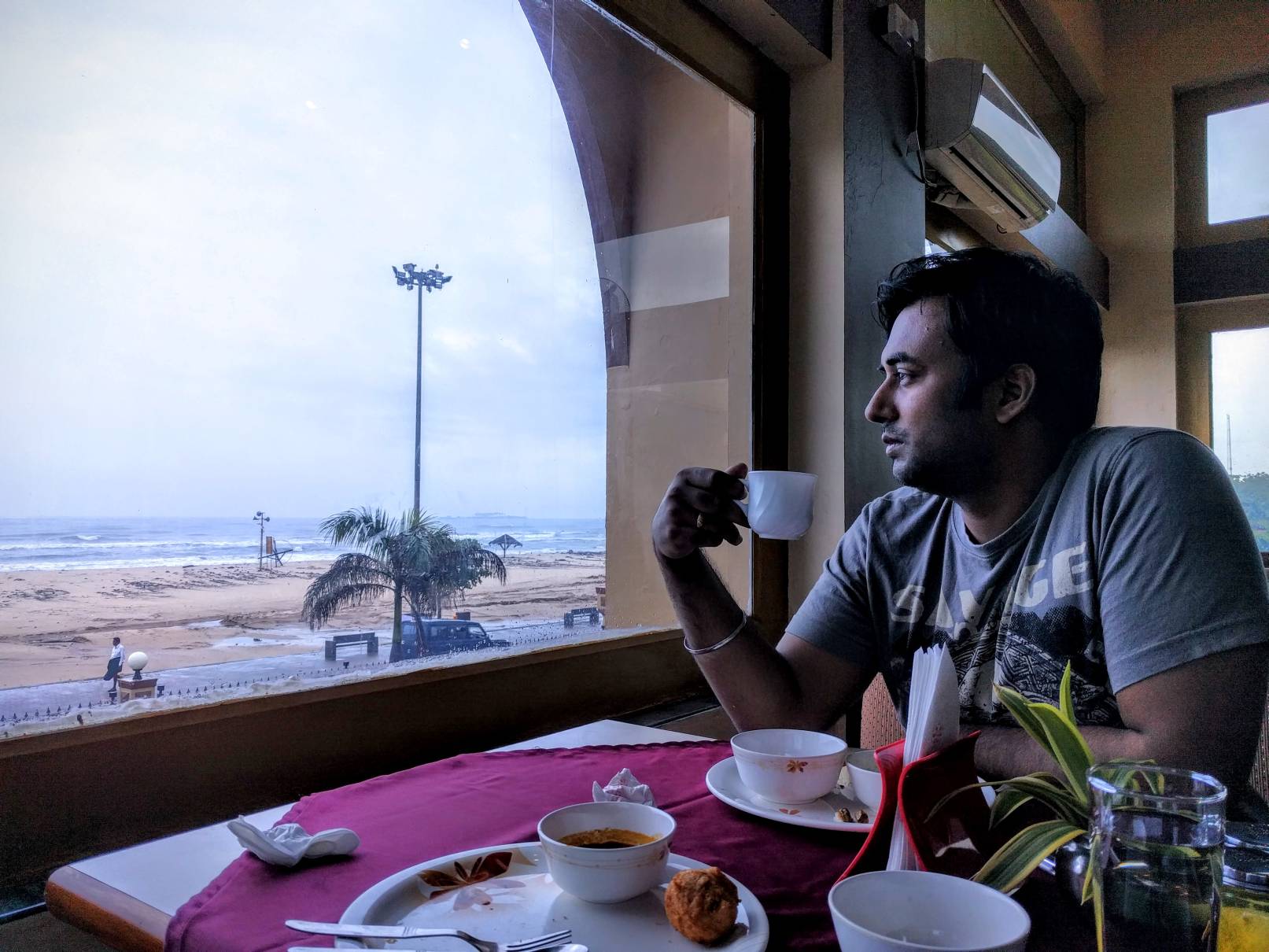 With a view like this while having breakfast, it was really hard to say goodbye, but we had to move on to avoid delays. Before we went full on the highway, we went searching for an umbrella to avoid getting drenched (Jo had an umbrella.. and with the way it’d been pouring, just one was not enough). We bought an Umbrella at a nearby town and started towards our first stop, Kavimane.

Unlike our earlier days, today’s journey was solely through State Highways. That meant narrower roads, but roads were well maintained and we didn’t run into any major potholes and jams. 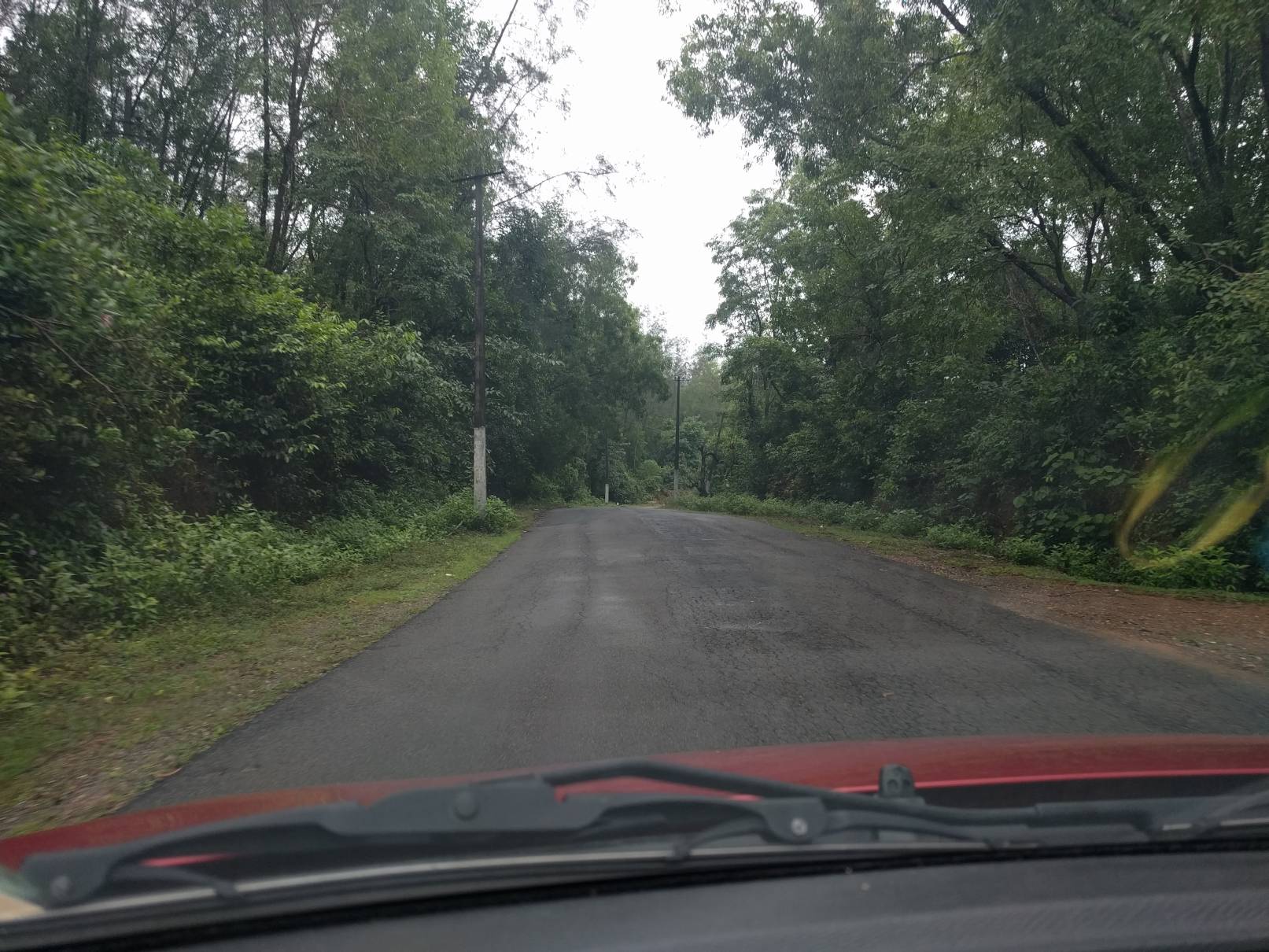 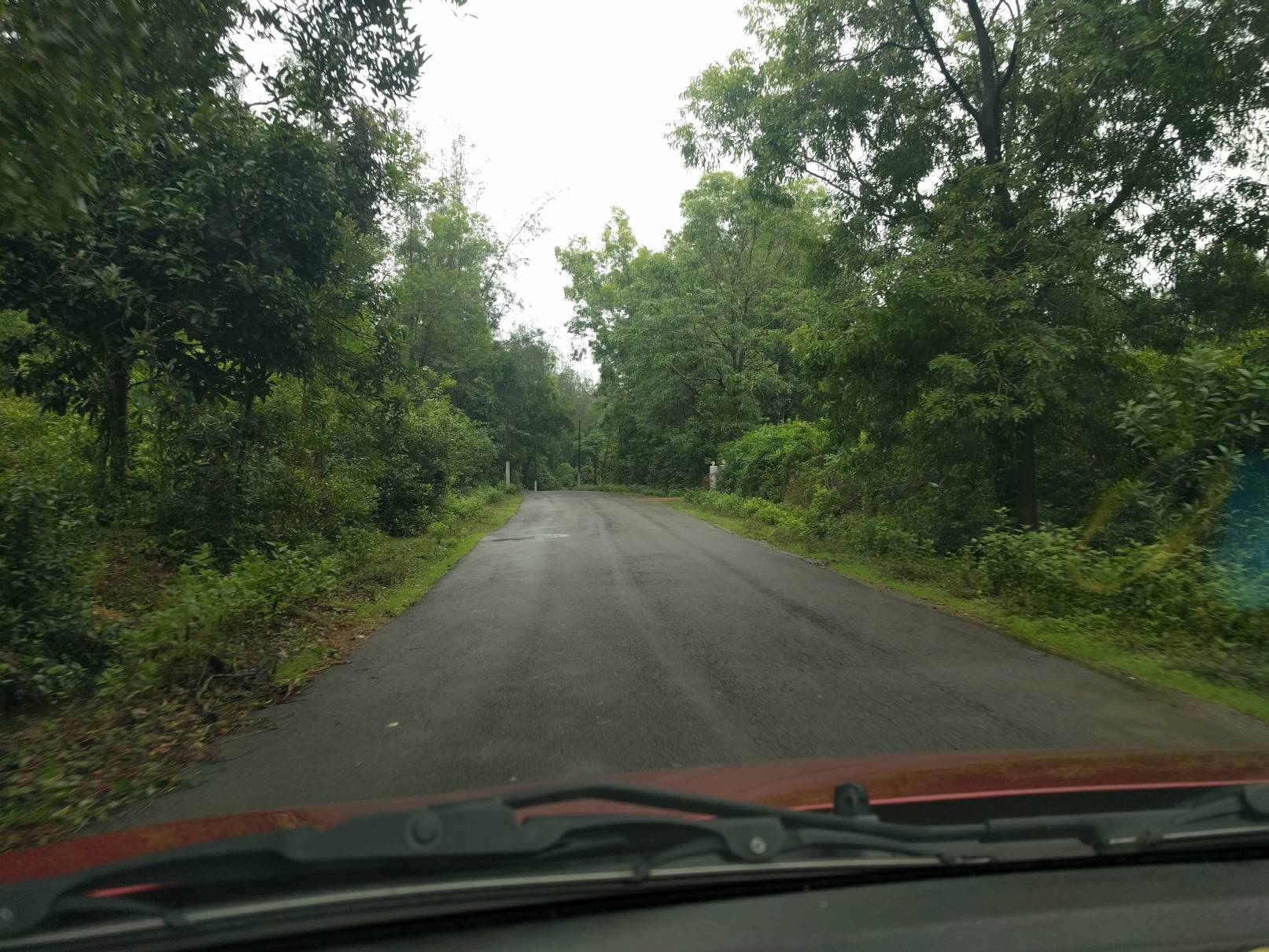 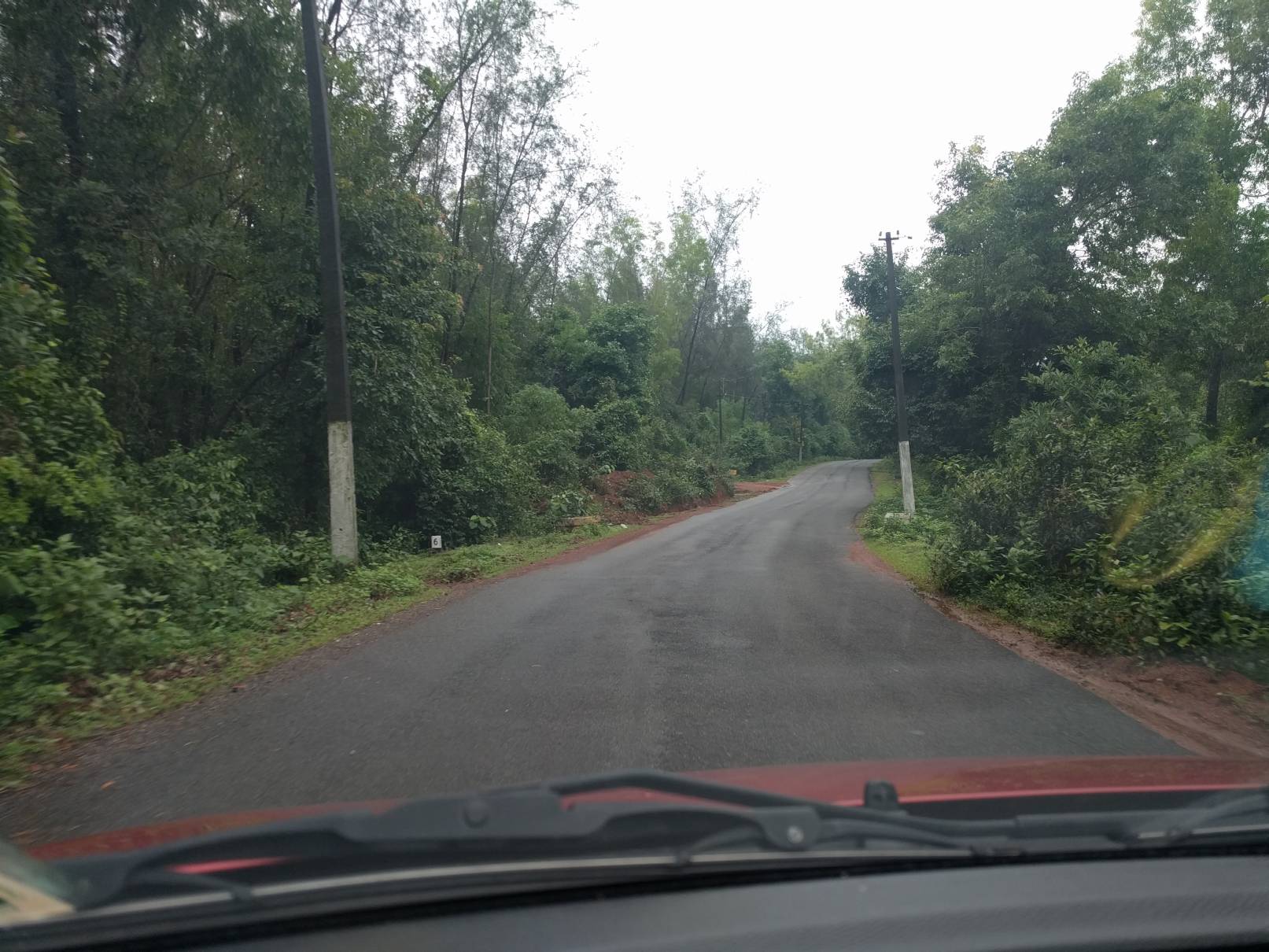 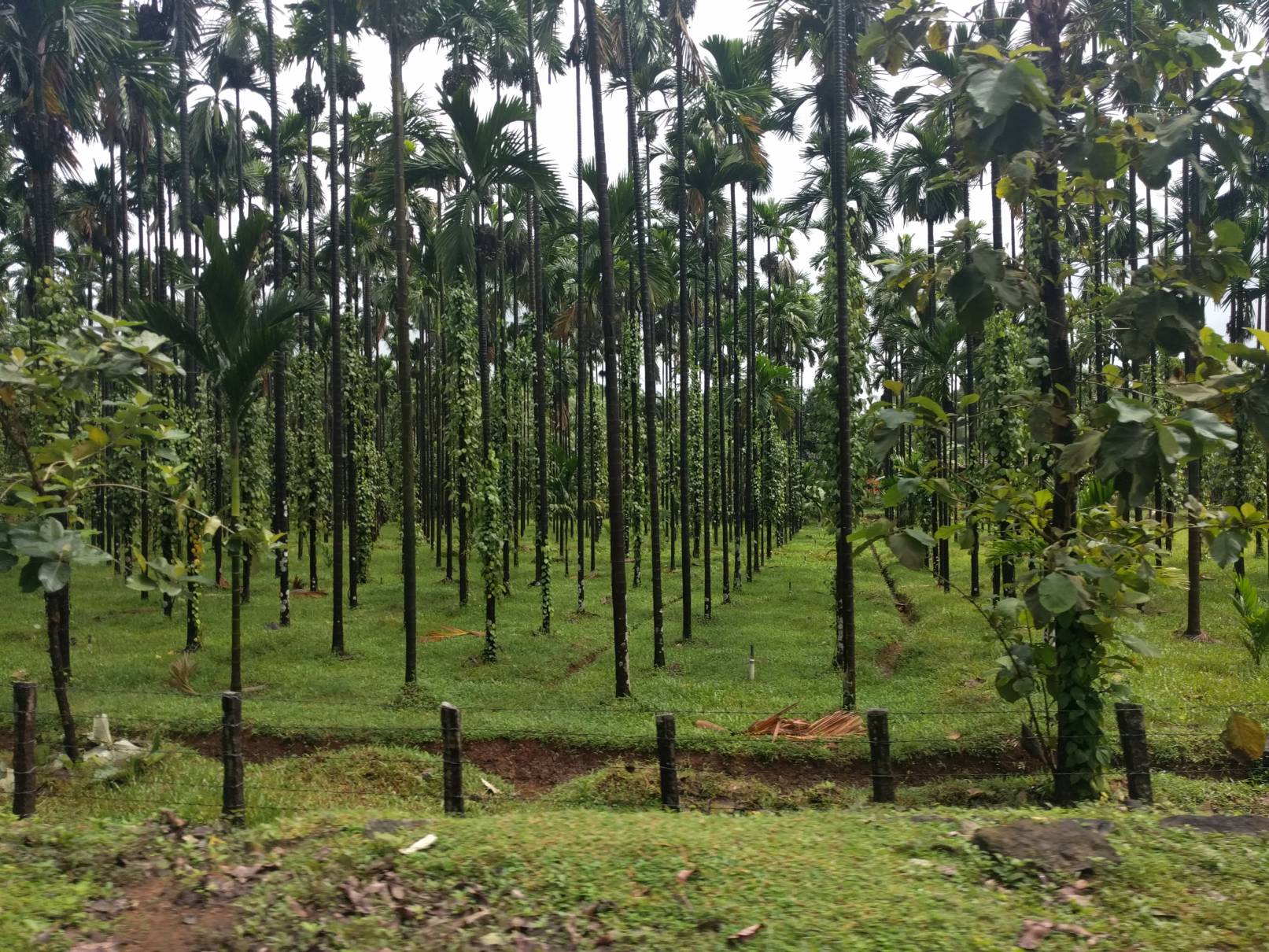 Passing through a plantation

As we got closer and closer towards Agumbe, the roads got narrower, the weather outside was changing - it becoming more and more foggy, till I noticed what Google Maps was showing up on the road ahead. 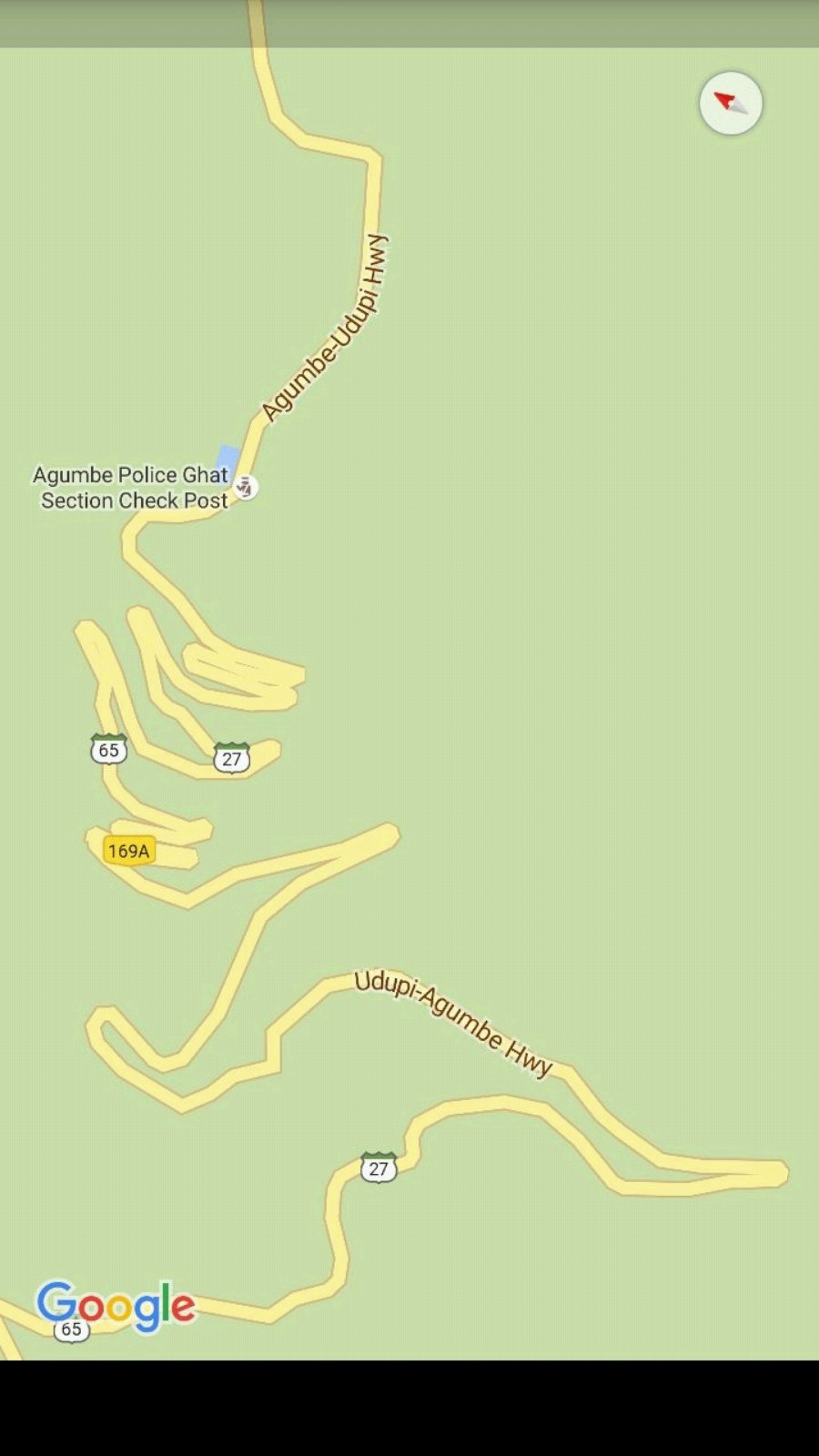 Fully pumped, we started climbing up only for the roads to get even narrower and foggier. Our car got clumped with a set of 2 cars ahead of us to form a cavalcade of sorts, closely sticking close to each other to avoid running into problems.

By the time we reached the peak, the fog was so thick, I could barely see anything beyond the hood. I stopped the car on the side to take a look around.. though we couldn’t see much, it was just amazing. 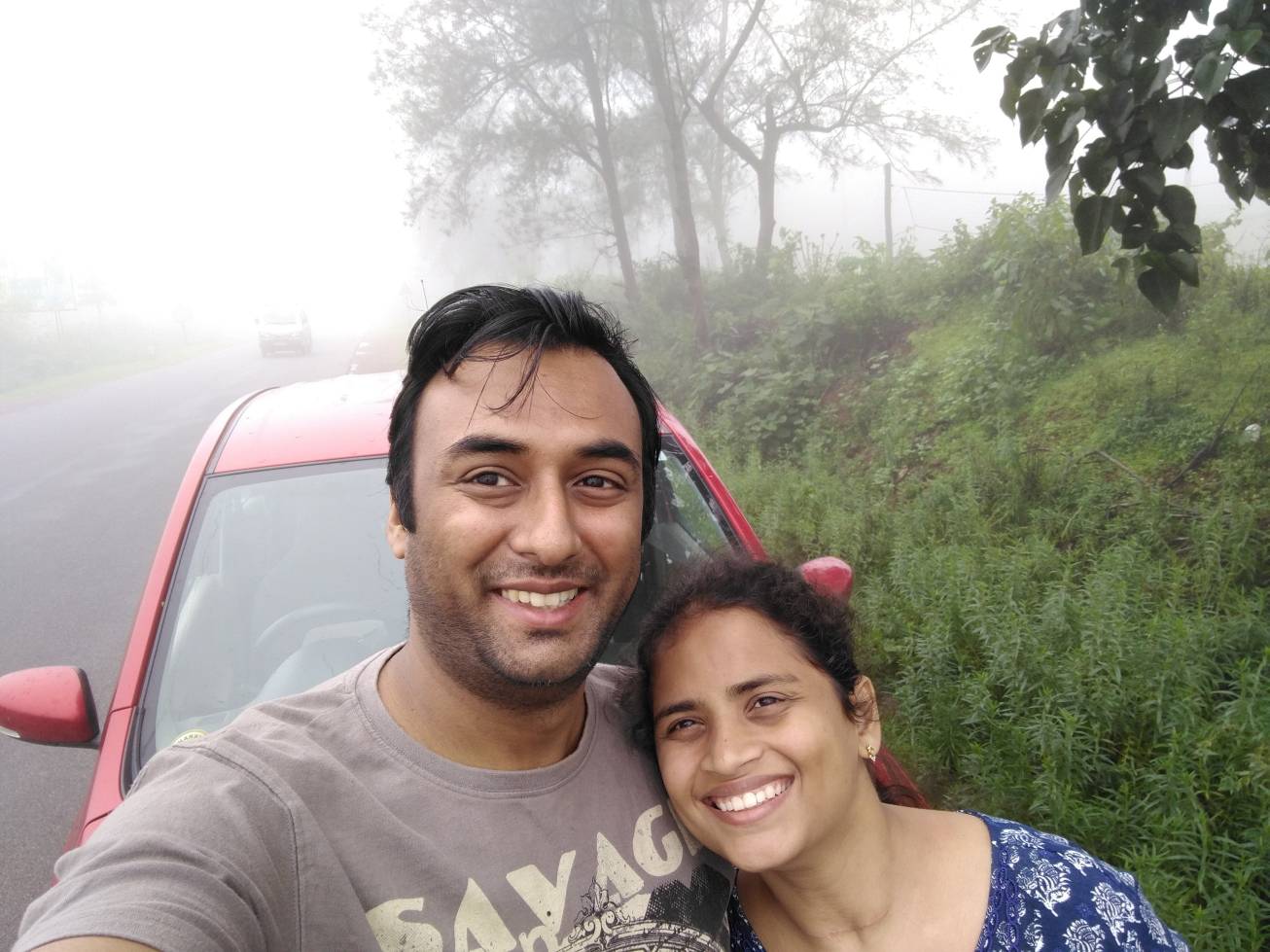 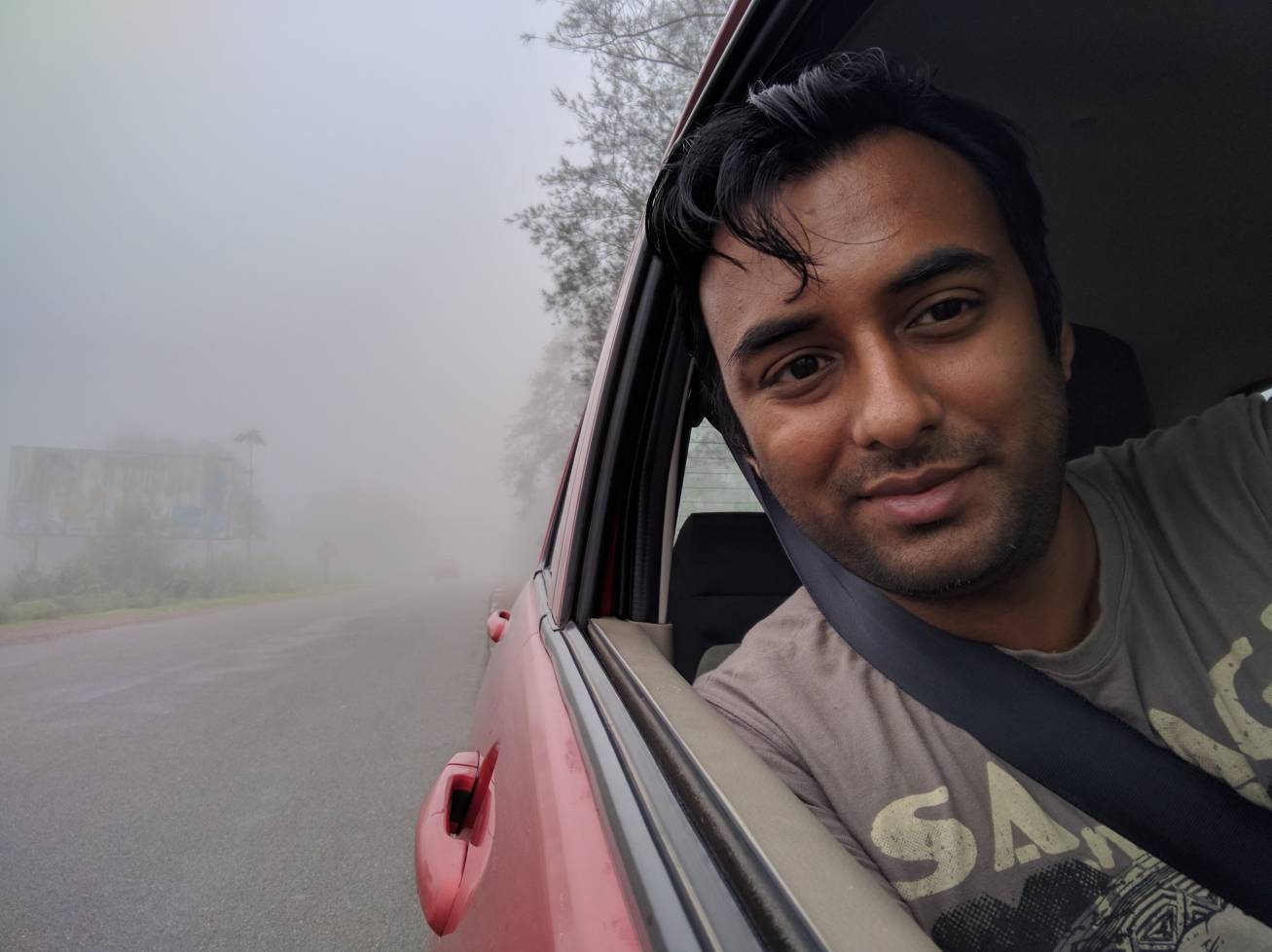 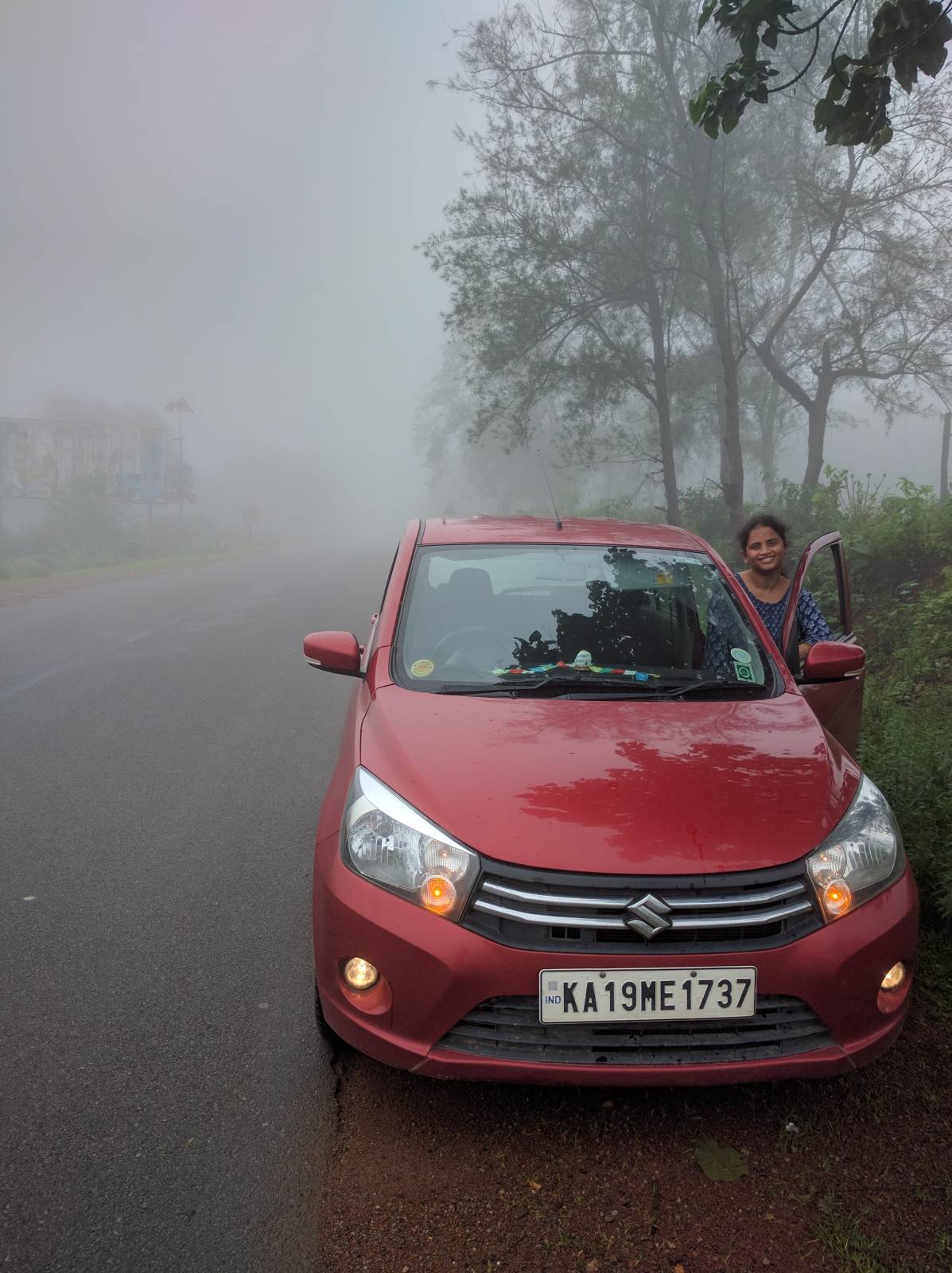 Agumbe done, we started for Kavimane and reached there in about 1.5 hours. Kavimane is the birth house of noted Kannada poet Kuvempu or Kupalli Venkatappa Puttappa. It is situated in the small village of Kupalli and is hard to miss. This is the ancestral house of Kuvempu. Kavimane(literally translated means House of the poet in Kannada) is a massive three-storied tiled house where Kuvempu spent most of his childhood. The house is now a museum and a pretty well maintained one at that, especially considering the entry fee is a rather low of ₹10. The house is very much similar to my ancestral house in Uppinaganady - as soon as you enter the house is a massive open courtyard. We were hesitant about visiting Kavimane especially considering the day was a holiday thanks to Eid. Once we reached, however, we were happy to know that the house is open on all days of the year.

Kavimane houses a lot of interesting and mundane artifacts from Kuvempu’s life - the mantapa where he got married, the kitchen utensils - these take back to the days gone past. Unfortunately photography was prohibited inside the house, so we had to make do with ones outside. 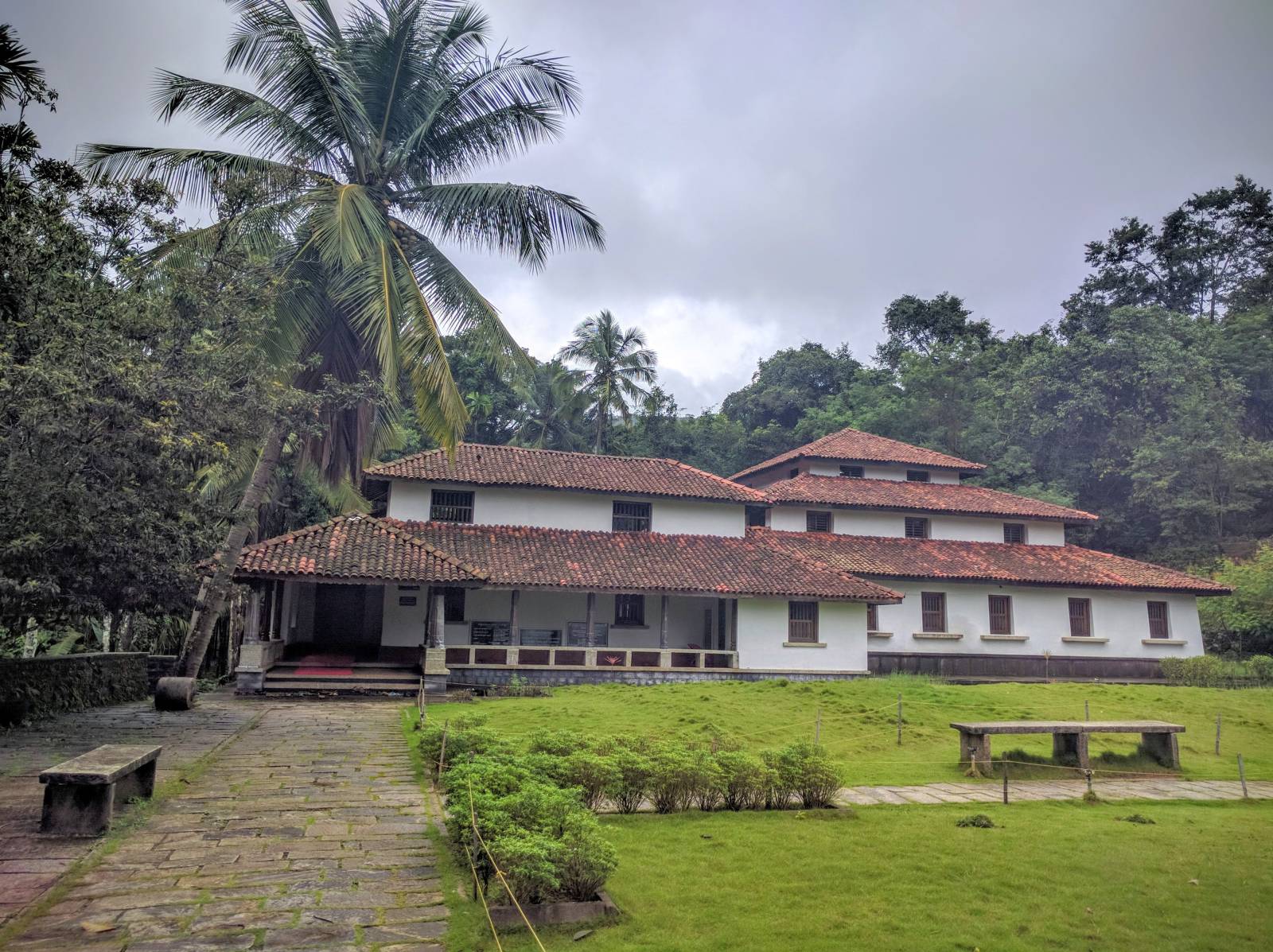 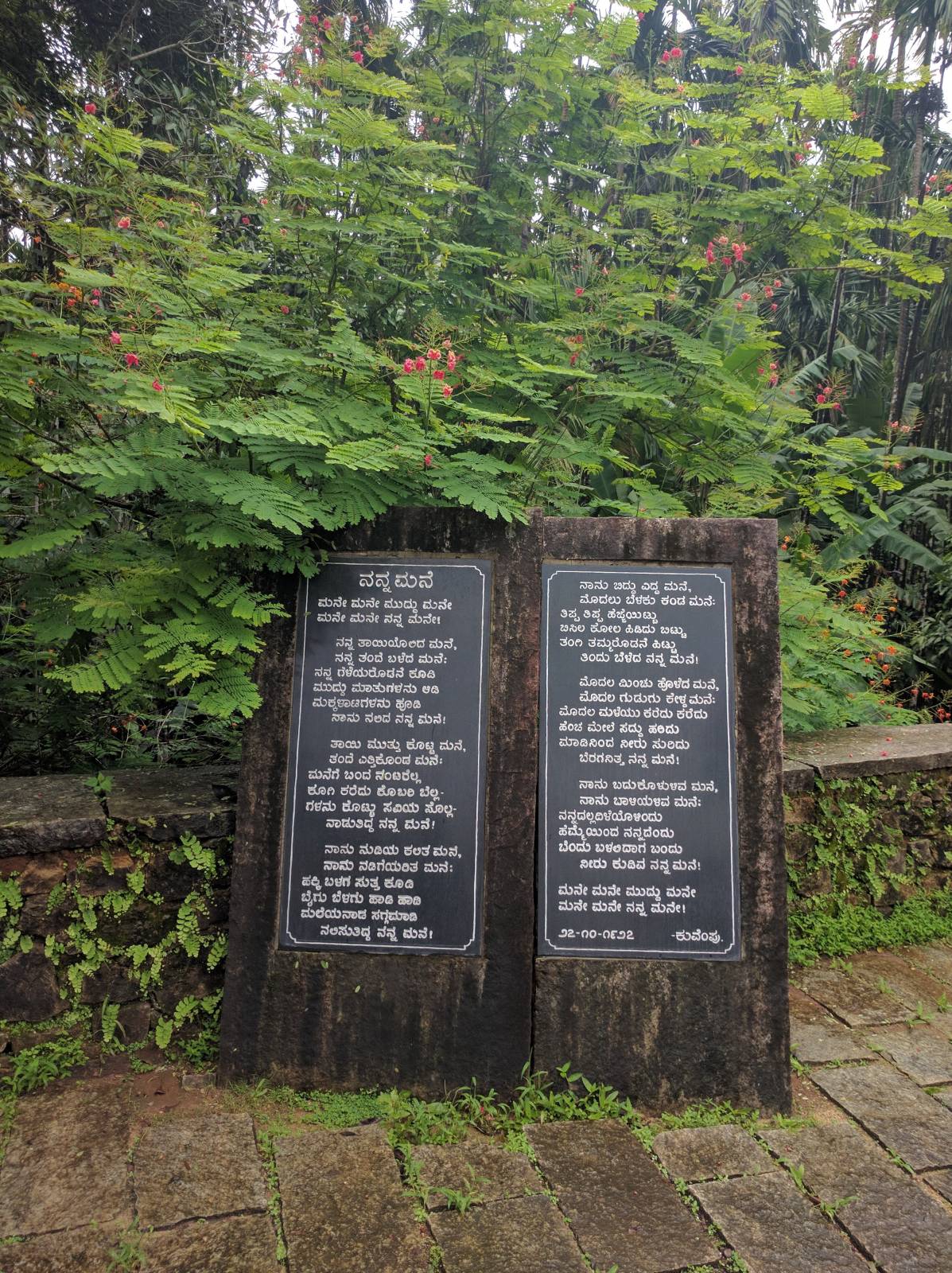 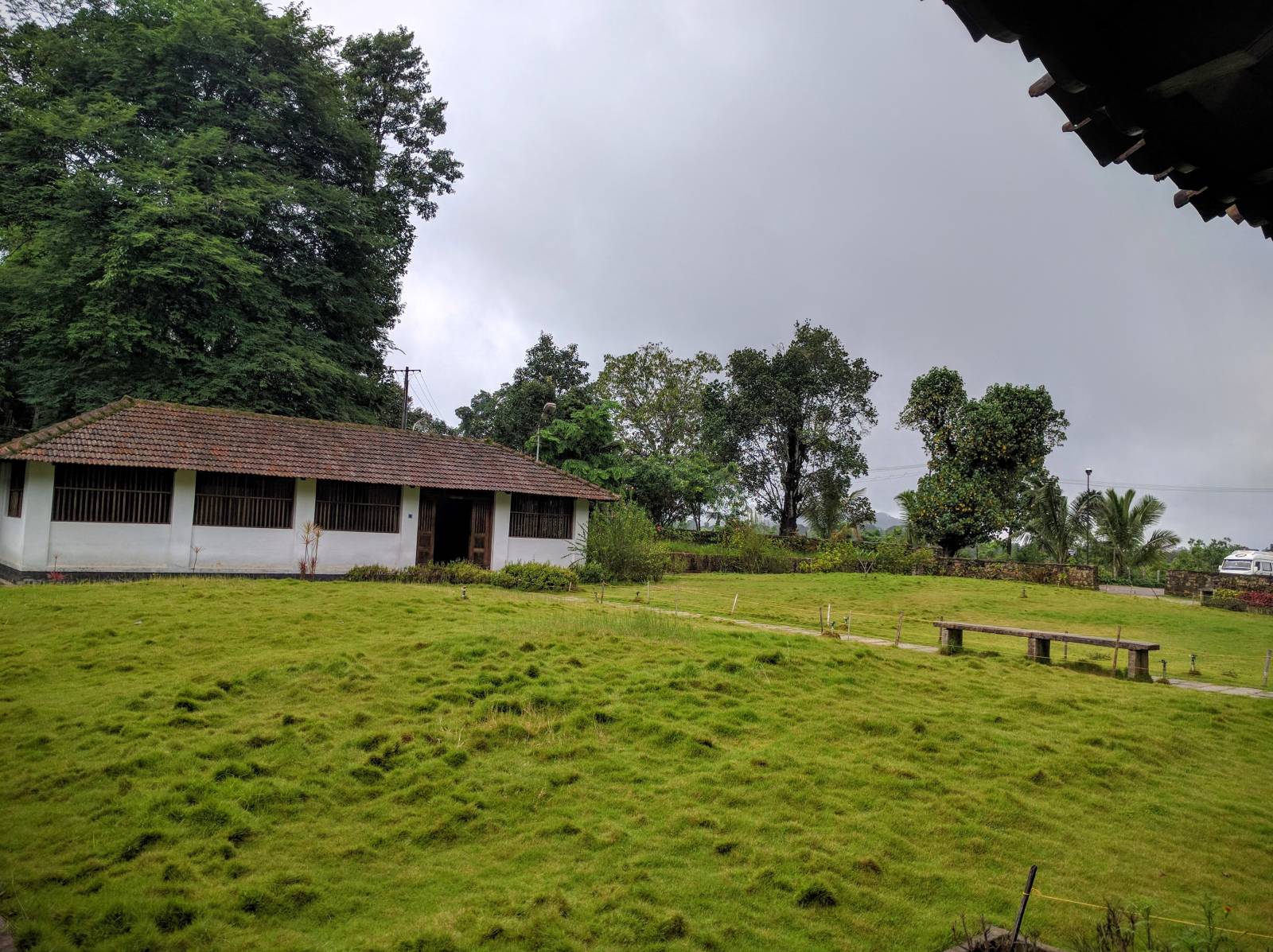 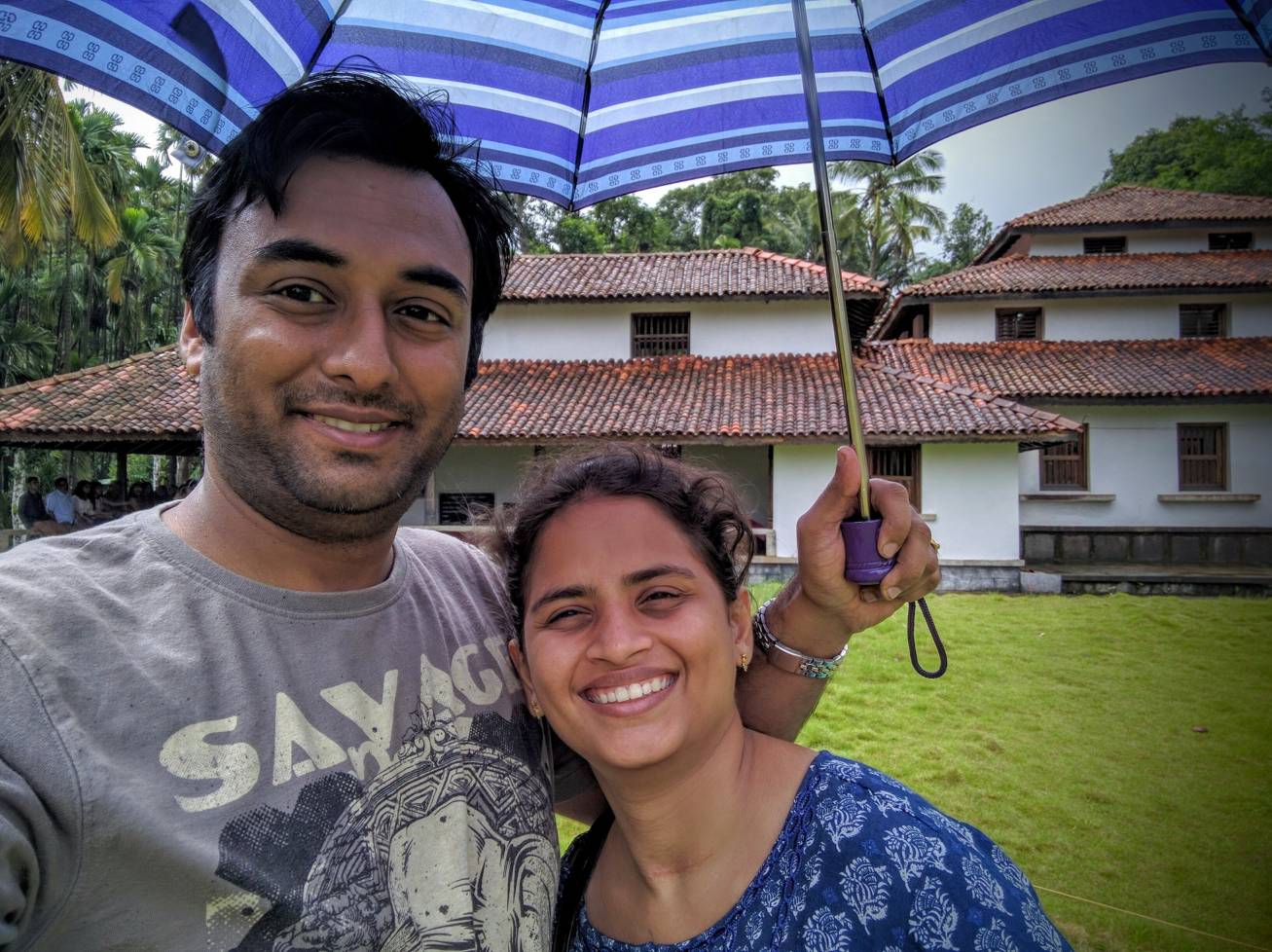 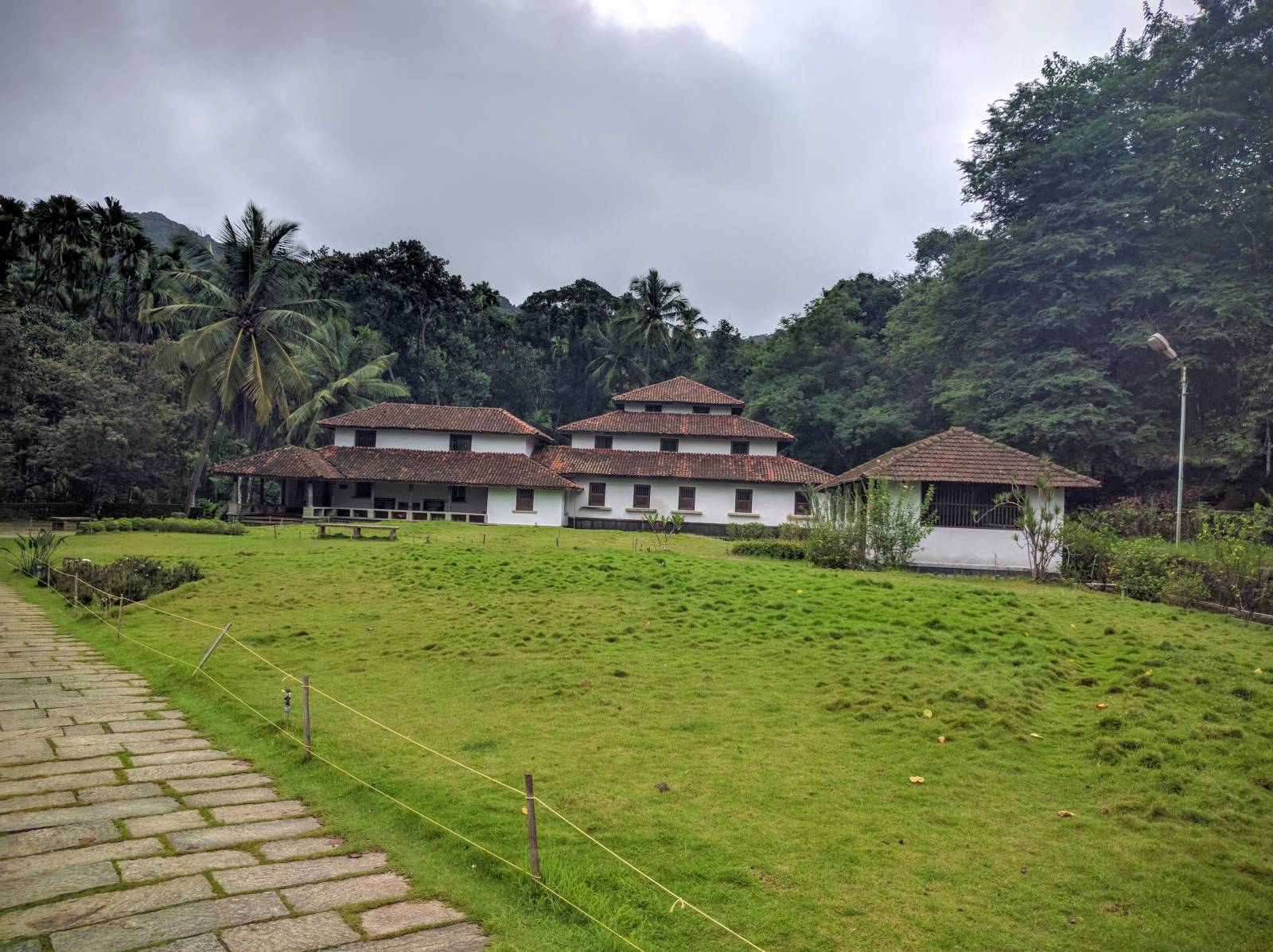 From here we went over to Kavishaila, which is a monument made of megalithic rocks arranged in a fashion resembling to the Stonehenge. Kavishaila is on the top of a small hill accessible via a short back road from Kavimane or a longer dedicated road. It is where Kuvempu used to write as a youngster and where he was laid to rest after his death.  The view from the top of Kavishaila is terrific but we couldn’t catch a proper sight as it started raining very heavily.

A 360 degree panoramic view of Kavishaila (well, almost - was hard to take a photosphere with an umbrella in your hand ) 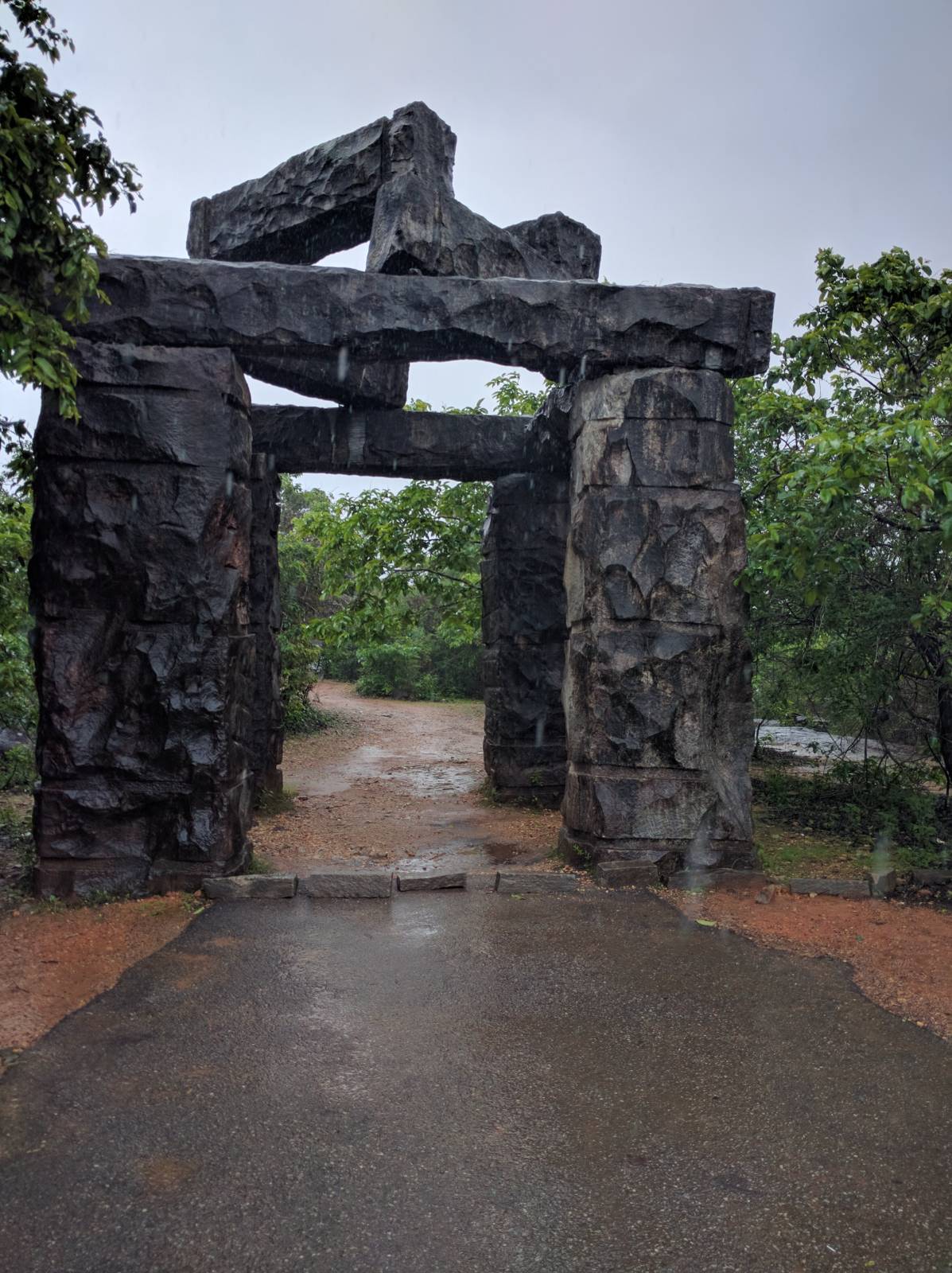 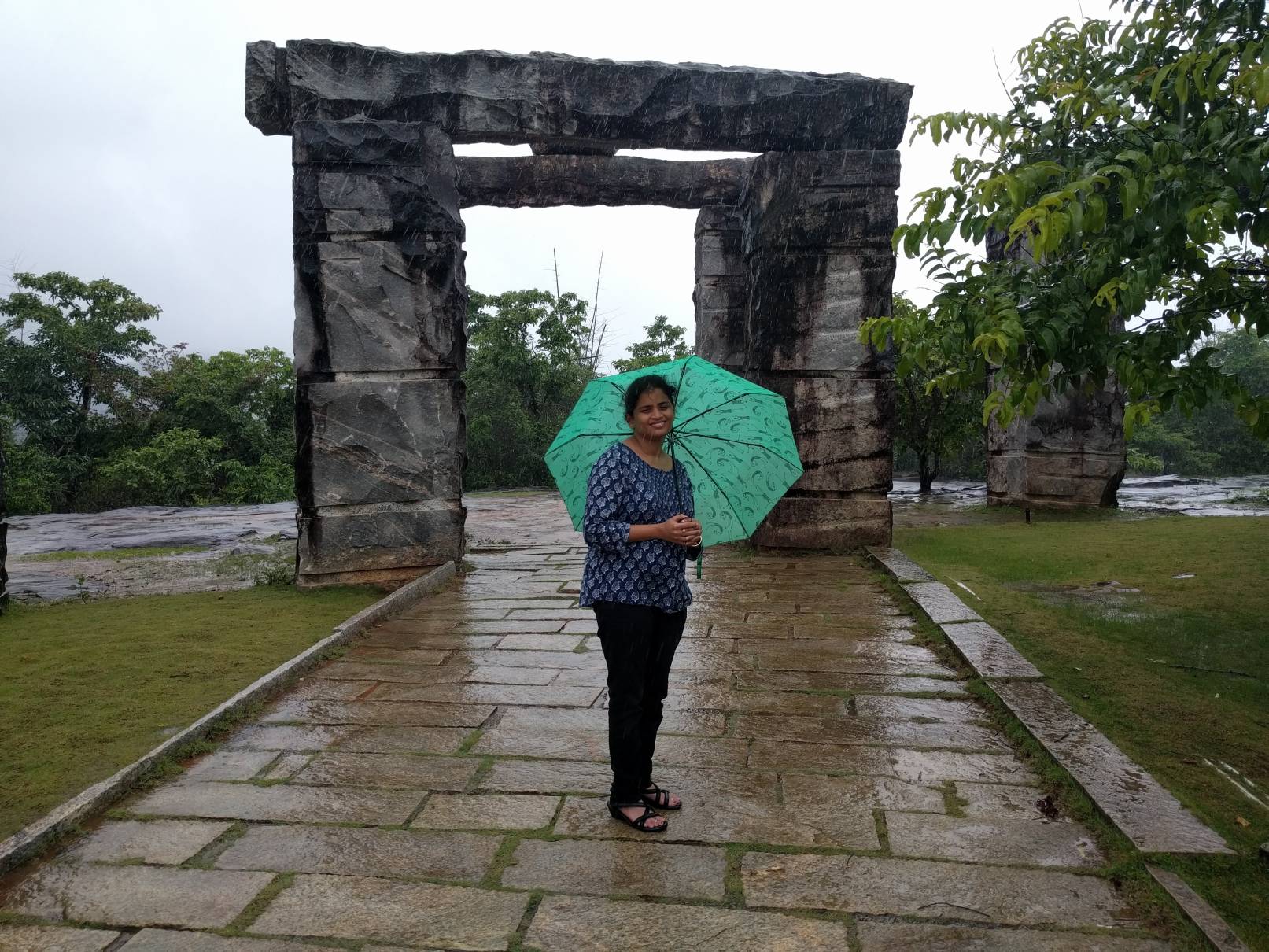 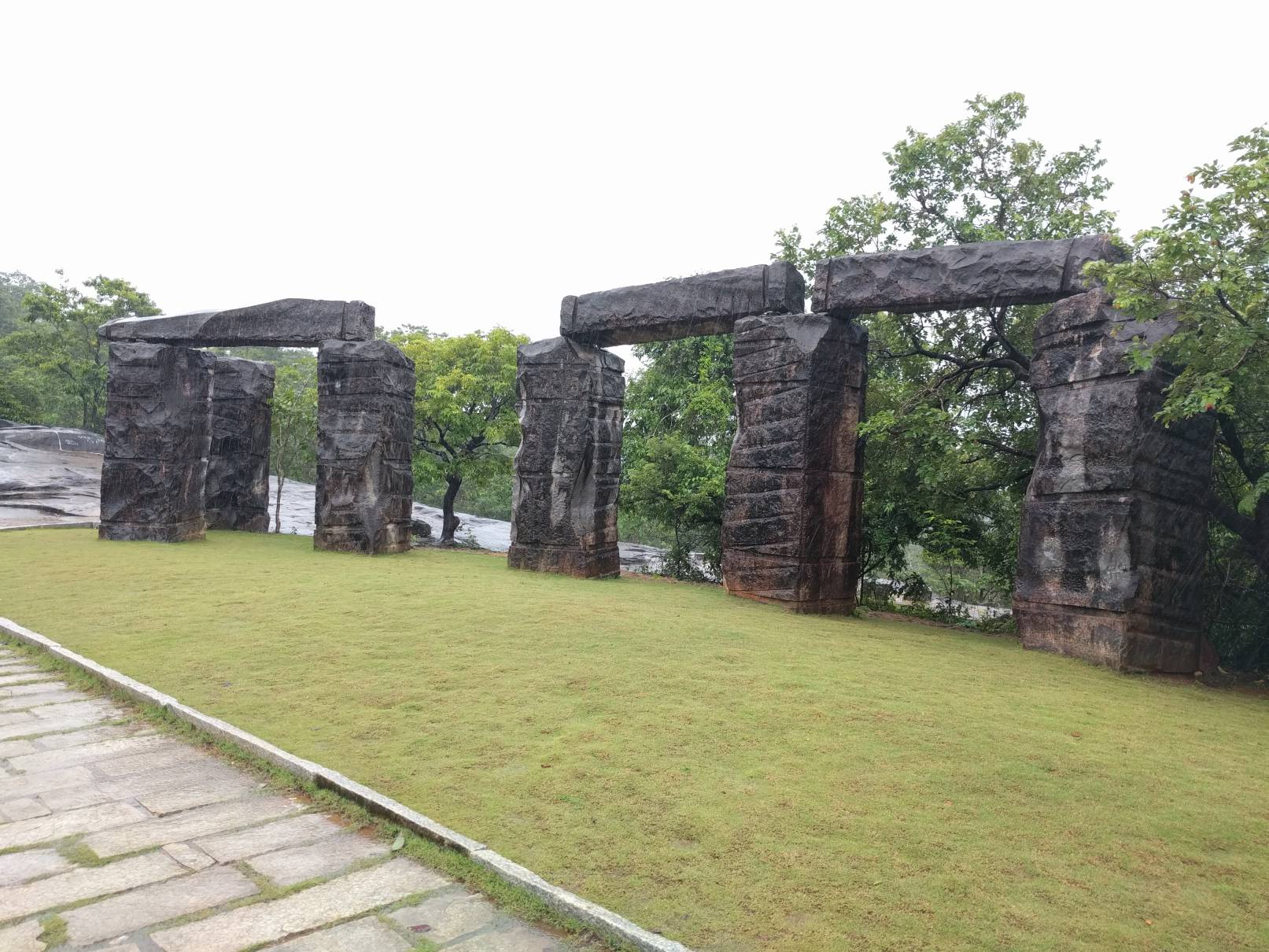 With lunch time near and stomach rumbling, we had to stop for lunch. There aren’t any places in Kupalli and I decided to stop at Thirthalli for lunch. After a quick lunch pitstop we started towards Jog and reached there in another couple of hours. A massive plaque welcomed us to Jog

Since it was a public holiday, Jog was pretty heavily crowded. We decided to check into our Hotel room at KSTDC Mayura Gersoppa. When the manager took us to our room and opened the doors, I couldn’t believe my eyes. The room was fairly massive and had an amazing view of Jog falls. 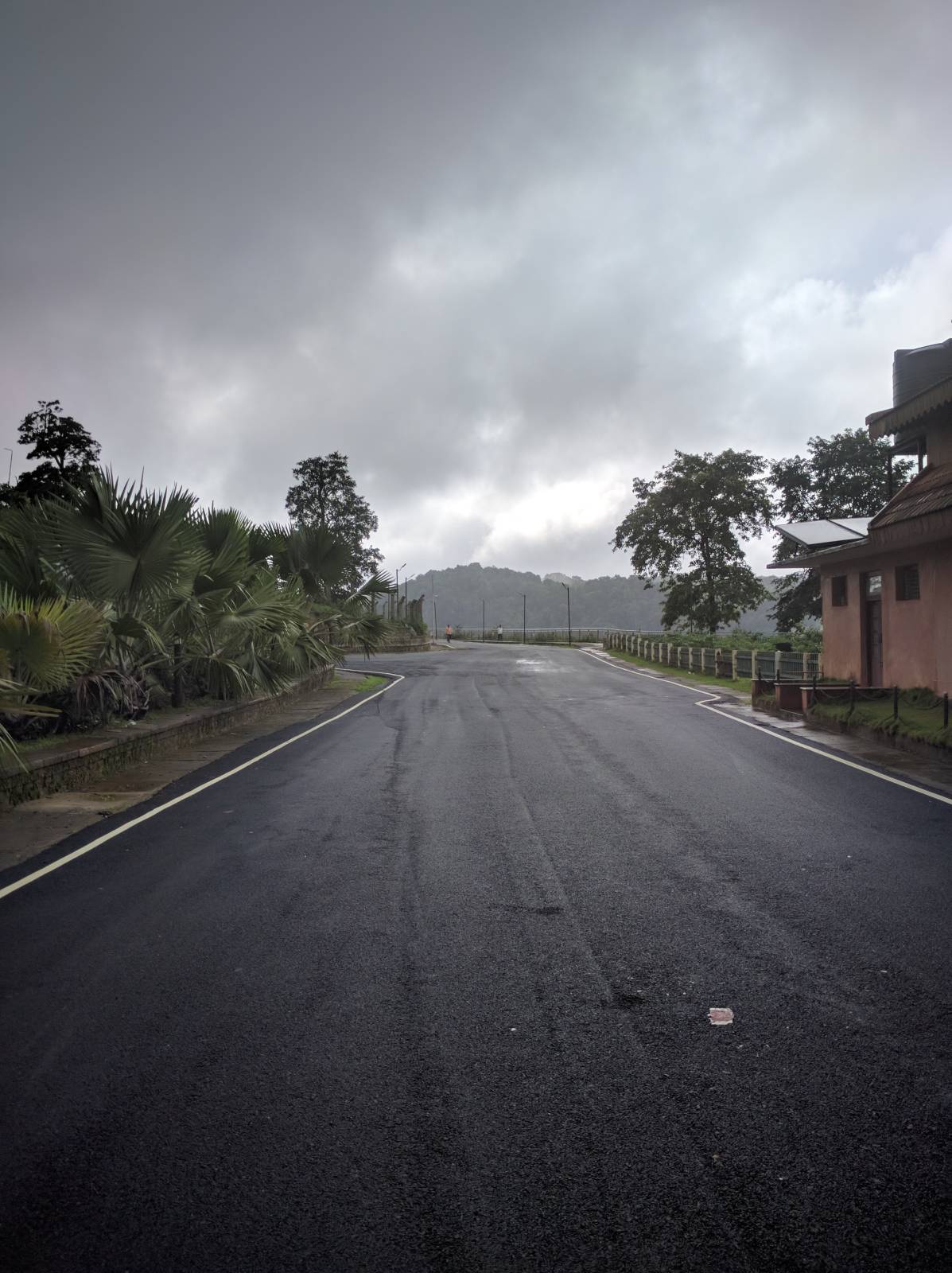 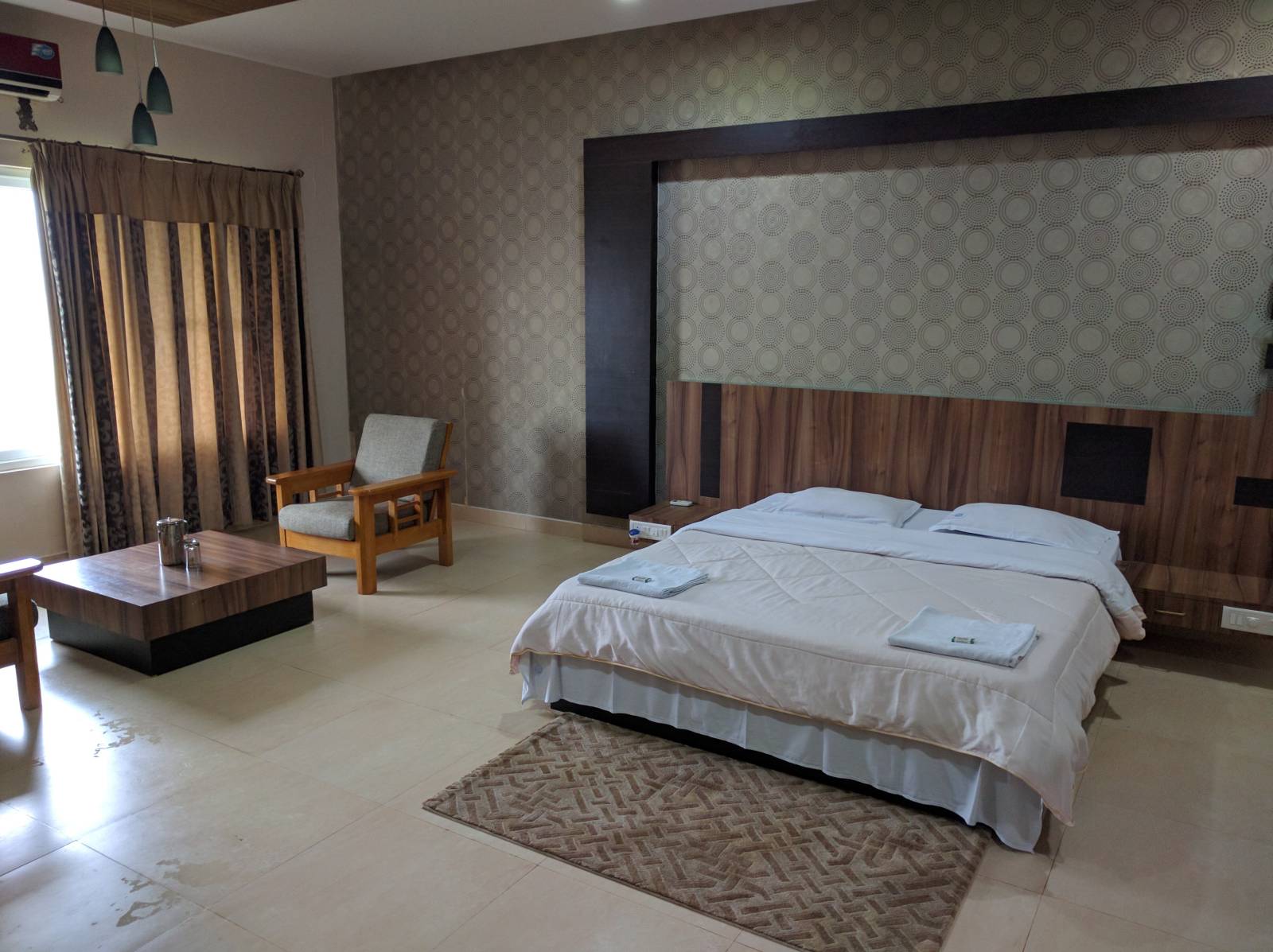 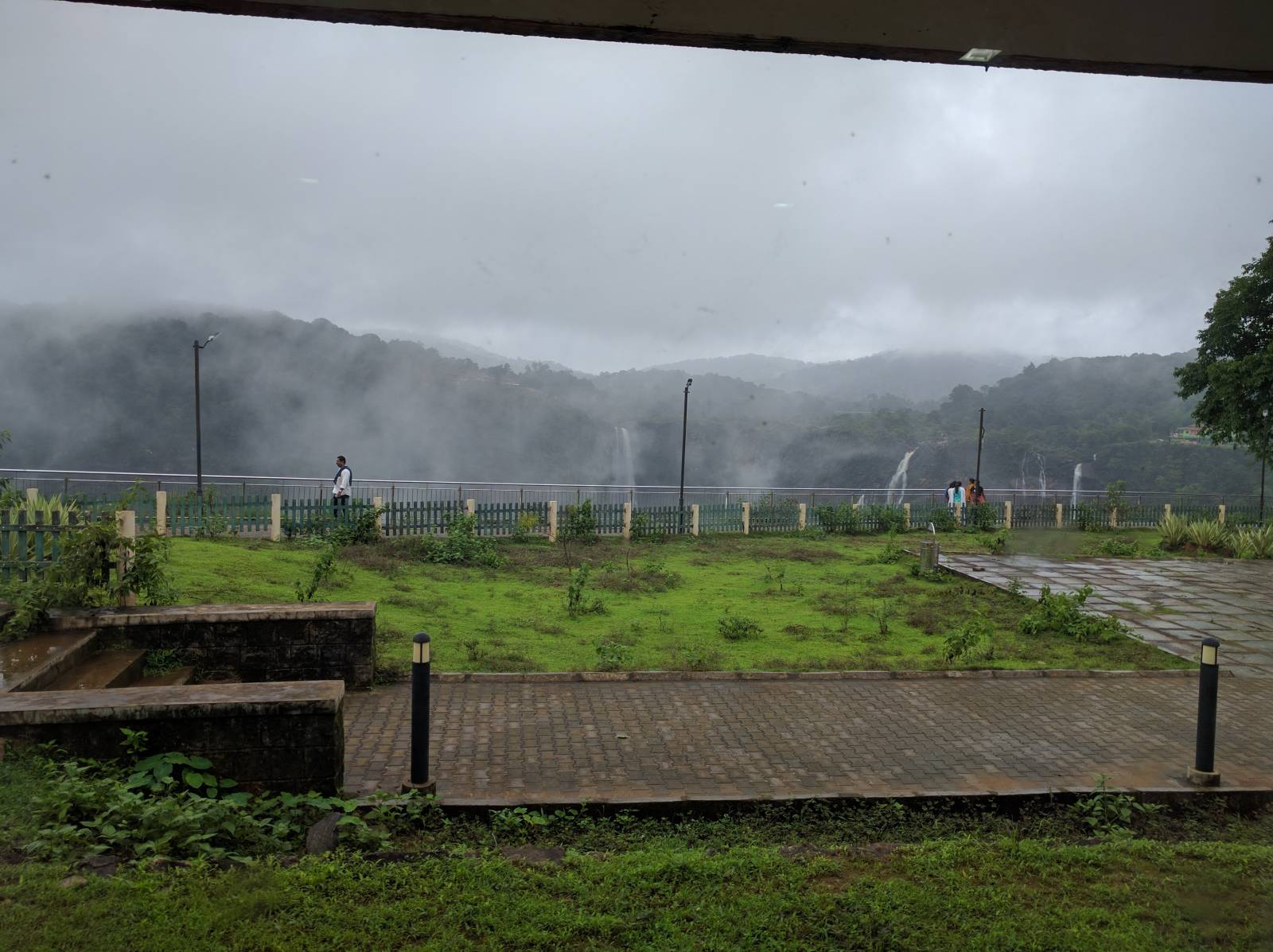 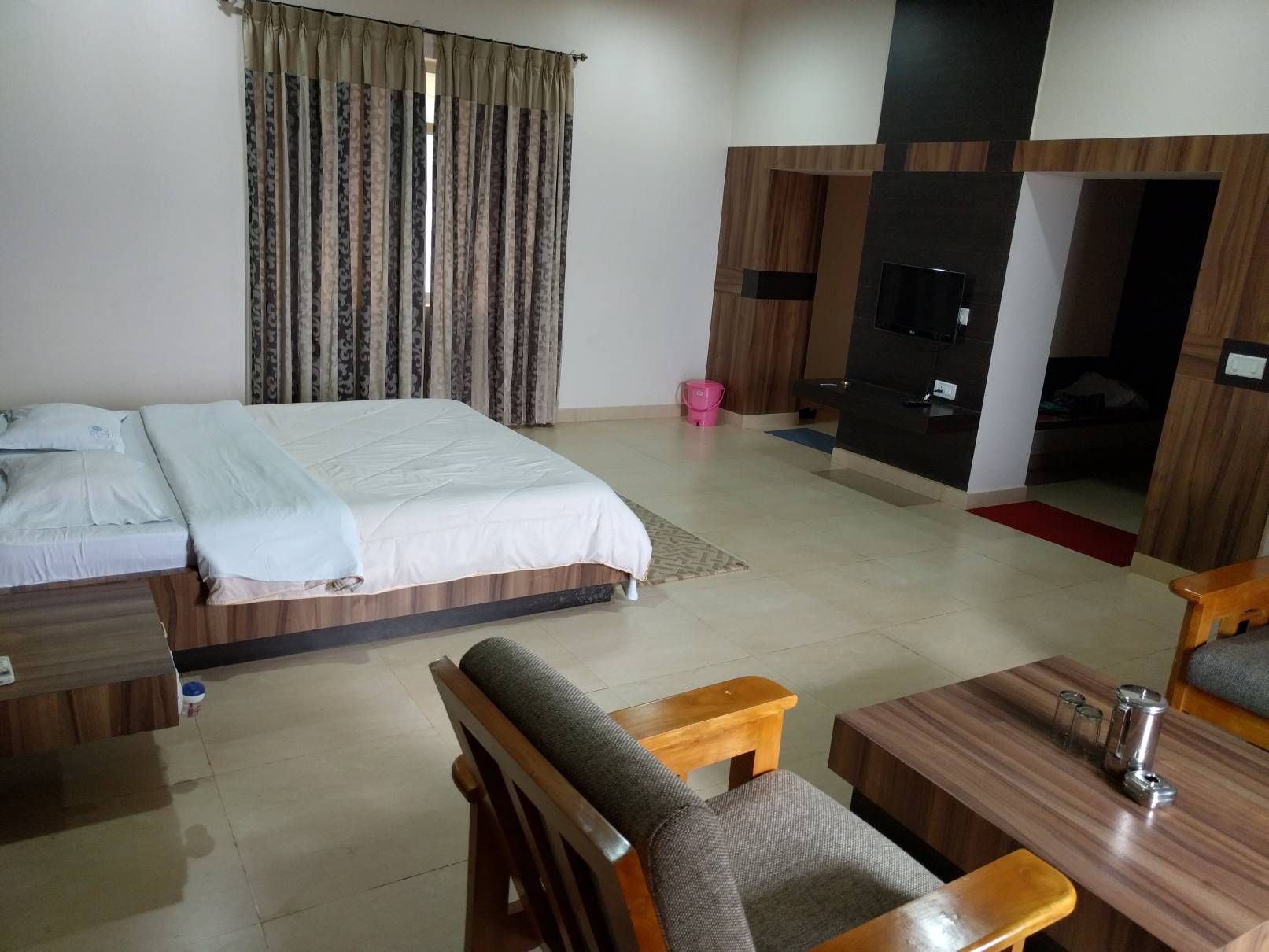 Since it’s quite common to have fog come over in no time and spoil the view of the falls, we ran over outside to grab a view of the majestic falls and we weren’t disappointed. 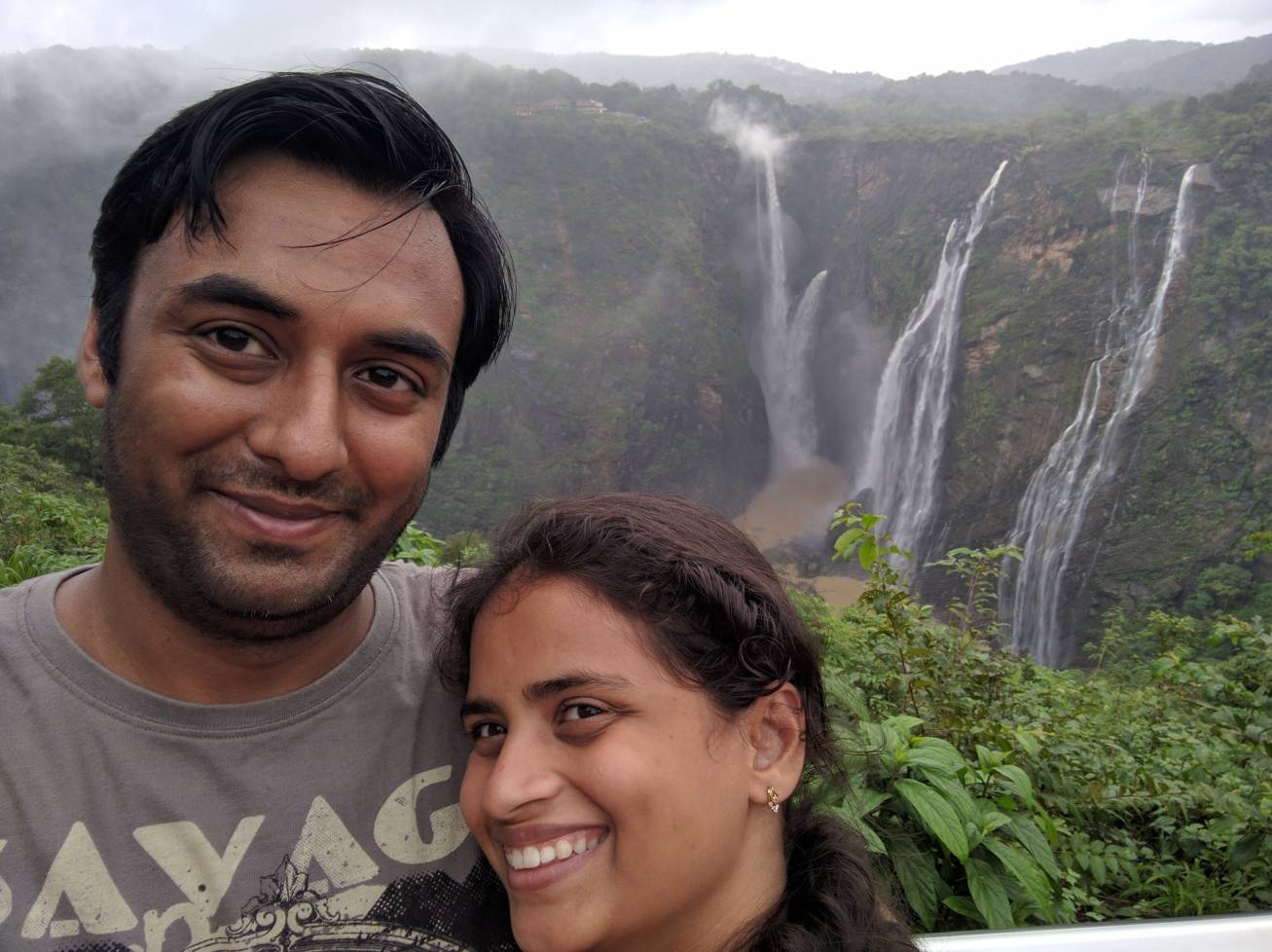 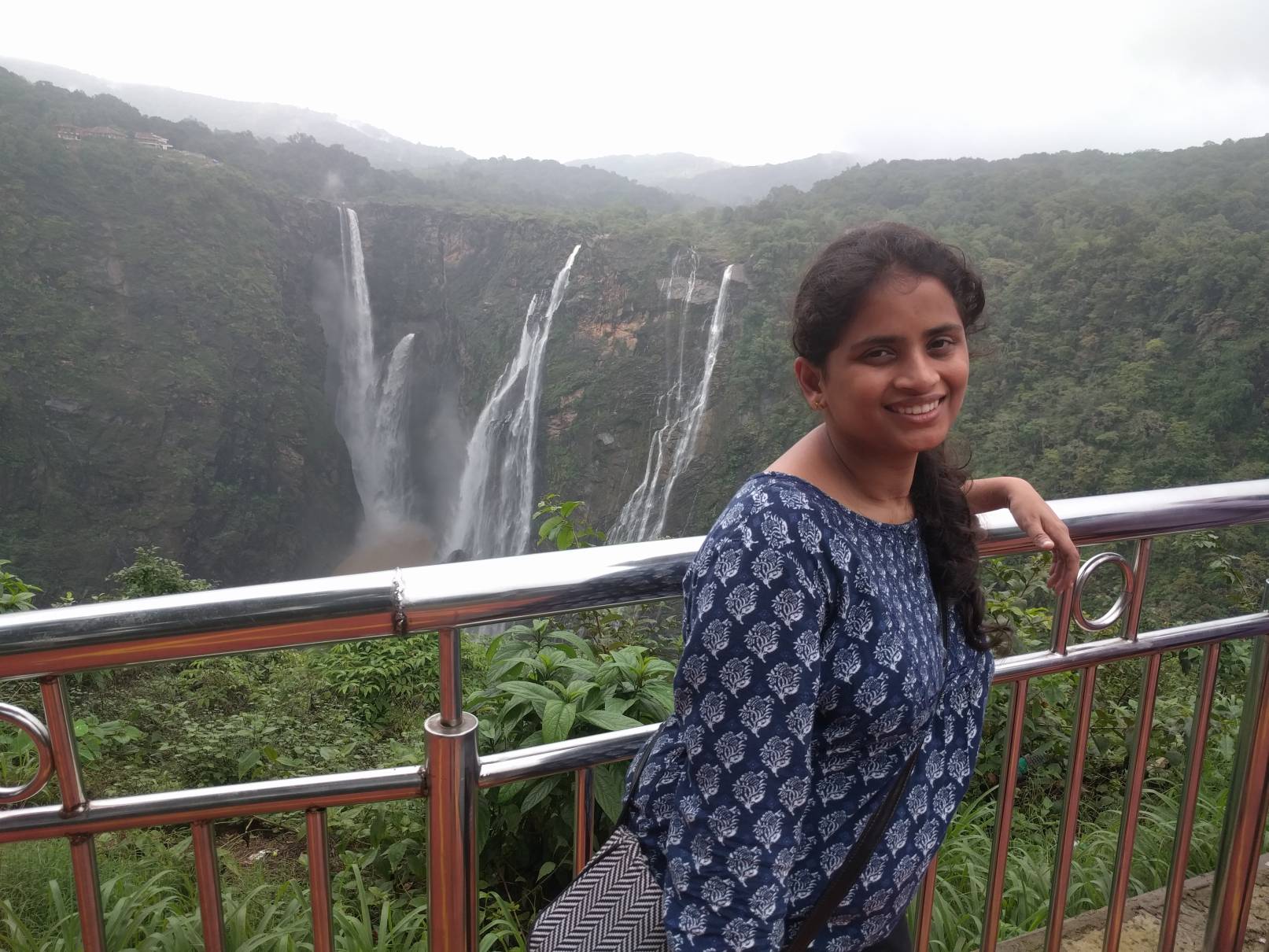 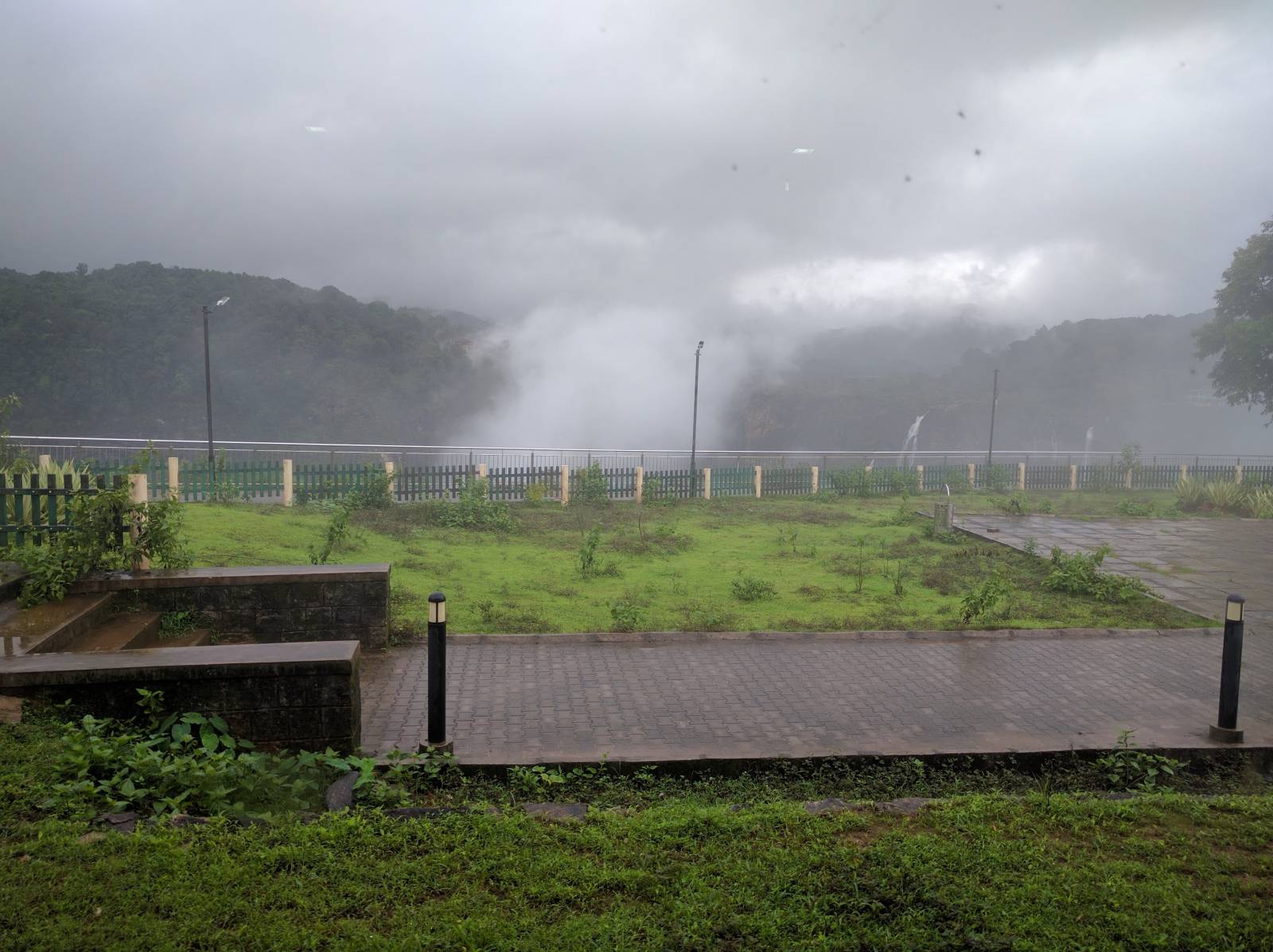 No sooner than we took a small walk across the corridor that the fog settled in, obscuring our view. We were told that there was to be a Laser light show but we decided to skip it, instead opting to return to our room and relax and retire for the night. A word of advice about food though: there’s only one restaurant here and you really don’t have too many choices. There are couple of small shops where you can maggi/chat etc so set your expectations accordingly.

Some facts about the day