If you’ve been following me on Twitter, you’d be knowing that most of the time my dinner is generally Rice Thaali + Chicken Curry / Egg Omlette(or all three, if I’m particularly hungry 😀 ) at a nearby Bengali restaurant named Maa Durga Hotel. Well I didn’t want to eat the same thing today, so decided to head over to a South Indian vegetarian restaurant called Balaji Woodlands, just outside the guest house where I stay. I was glancing through the menu deciding on what to order. I *almost* decided to order Naan+Kaaju Paneer Combo, when I saw an item, which somehow I’d missed earlier. What was it?
**
** 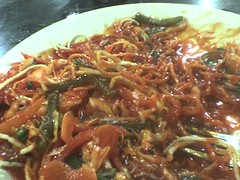 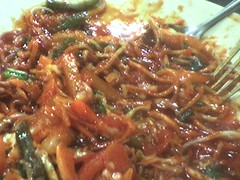 Well, it turned out that American Capsicum Noodles is just another fancy name for Chop Suey! More like some fried cut noodles, capsicum, onions and a whole lotta ketchup. Got to admit though, it wasn’t _that_ bad, fairly OK, decent quantity for Rs 40 that I paid for it.Very fattening? Definitely