It’s been  a while hasn’t it, since I last blogged ? *goes to next tab to check last manual blog post* April 19. God! Hadn’t realized its been so long since I last composed. Yes, I’m alive (hey you’re reading this aren’t ya?). I can hear the collective yells of “where the hell have you been”. Well - work. Been drowned, swamped, overloaded - basically been busy with shit loads of work.

Next question - Am I in Austin ?

Yup, I’m still in the Capital of the Lone Star State. “But you were supposed to return to India in February end May end”. Well I’m still in Austin. So what happened ? Well I arrived here on B1 visa, with my I-94 expiring on Feb 20. It was a no-brainer that an extension for my I-94 would be filed, but I assumed that the extension period would be 3 months, meaning that I’d have to exit by May 20. Well it turned out that the extension period filed was for 6 months.. which means I can stay here in US till August 20. As of now, I’m going be in US till June end - mid July. I don’t know if I will be here till August - that depends on upcoming days ahead.

Work wise - I’ve been pretty busy with testing the weekly releases coming from the offshore team in Chennai. In addition to the weekly release I’m also overlooking the client’s testing of the product. Besides these, I’m also responsible for bug tracking - filing new bugs, attaching various scenarios under which a bug has cropped up, giving clarifications to the team @ Chennai when required, which includes an hour or couple of hours of conference calls and WebEx sessions. My onsite role has been mainly a testing one - I didn’t do any coding till last month - there was a glaring error in Premium calculation and the rating system had to be totally reworked. I was given the role of reworking on this - and boy oh boy coding after a gap of about 5 months was something else! I was making stupid rookie mistakes and took me a while to get back into the coding groove.

I also had to totally rework and reconfigure Per Patient rating - and this took another whole chunk of time.  I was also given the role of overhauling the data migration scripts - the scripts were pretty dated and not in line with how far the product had evolved. Did I mention I was doing all of this simultaneously, side by side? So NOW you know where the heck I had been. Heck my tweeting rate had even dropped drastically ( might come as relief for few 😛 ).

That’s from work side. Personally - well work has pretty much dominated my personal life 😐 Regardless, I took a quick trip to Dallas (Garland, actually) to meet my cousin sis - she delivered a baby girl recently and wanted to meet and catch up with her. Also got to meet my Aunt, as she had come down to Garland to be with her daughter during delivery. The girl, my neice, has been named as Nikhila. Here’s a pic of me holding her. 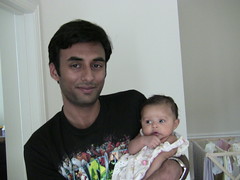 I generally don’t hold kids in my arms - I’m terrified actually, but I couldn’t pass this opportunity. You can catch the entire set here.

New gadgets - well I wanted a new digicam - and after much deliberation I purchased a Panasonic Lumix DMC-FZ28. I bought this from Amazon, found a pretty good deal - the FZ28 + a Kingston 4GB SDHC memory card + shipping came upto $270 - pretty sweet!

The camera’s not a DSLR(I deliberately didn’t go for a DSLR) - but its a prosumer level camera. Specs wise- its a 10.1 MP camera, 18X optical zoom, and supports HD video recording to boot! The picture quality is pretty awesome, and its got a nice 16:9 still capture mode, and makes for some great landscape pictures such as the one below. 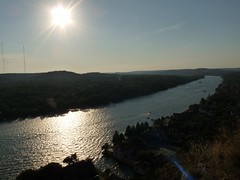 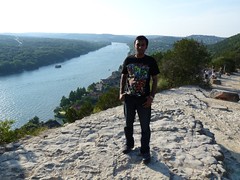 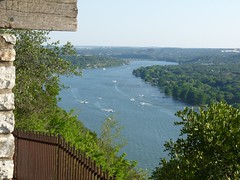 These pictures were taken Mt Bonnell, Austin’s highest point - had been there last week.

My extended stay here meant that I couldn’t make to our college Alumini meet. Hopefully for the next alumini meet, I would be able to make it.

Other news - well my room in Chennai has been vacated - my roomie was staying there, but he got an onsite opportunity, to Nigeria - and it made no sense to hold on to the room. Our “Godfather”, Shankara(Shankar, actually but we prefer calling him Shankara 😛  )- my flatmate, resigned from his post inorder to pursue higher studies. I’ve had a blast of a time with him, staying with him, working with him, hanging out with him - May God Bless your Shankara and we will definitely meet again! Pic below is Shankara - 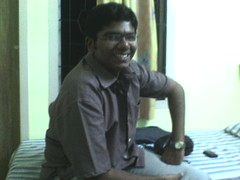 Its going to be 7 months of me staying in Austin - the onsite experience has been one terrific rollercoaster ride. The things I’ve learnt - its just phenomenal. Client handling experience is unforgettable - the amount I’d learnt while in Chennai is nowhere close what I’ve learnt over here. I’m also - never going to bitch about guys onsite. The pressure, expectations here is far too much to be comprehended by someone who’s never been in this position.

So what’s in the future - I’m going to complete 2 years of working at 3i Infotech Ltd, in July. Would love to be back in India by then, perhaps a reunion dinner with my batchmates - the Ruby gang . Also contemplating in pursuing INS certification. Its also high time I get myself OCA/OCP certified.

Besides these I’m also contemplating starting a gaming blog. With work relaxing in the upcoming days (hopefully) I should be able to devote more time to these. Well that’s about it for now. More updates soon!