A much deserved break: The Bangalore trip – Sathya's World
This page looks best with JavaScript enabled

A much deserved break: The Bangalore trip

I don’t take off from work very often - the main reason being me working in Chennai means it nigh impossible to visit my hometown of Mangalore over the weekend. So generally I have a set routine of work for about 3-4 months, then take a week or so off (often coinciding with some festivals/holidays/extended weekends to get the maximum number of holidays with minimum number of leaves) to take a nice break, relax and rejuvenate - an approach which had worked very well over the past couple of years that I’ve been working.

Speaking of breaks - its been quite sometime since I took a break - the last time when I was on a leave was back in August when I came back to India after my Austin jig. Initially I had planned to take an off during second week of November - a plan which sadly never materialized due to my increasing workload. While this was going on, I was in constant touch with my engineering classmates - Rakesh, Prasad, Sid,  Smi & Rach via mails, and one thing that we were always contemplating was a meetup (reunion ?) at a place so that all of can catch up at a common point. Bangalore seemed to logical choice given that it was the central location from Chennai as well as Mangalore. Deciding on the date was bit of a bother as we struggled to decide on a weekend when everyone was free. Finally we decided that New Year’s weekend would be the best time to meet, and I booked my bus tickets for Bangalore ( Volvo A/C Sleeper, night bus).

The plan was that I’d reach Bangalore on 1st morning ( yeah, was travelling on 31st night boo!), Rakesh & Smi would join at Rac’s place the same day while Prasad would join the next day. Sid couldn’t make it to the meet unfortunately. I reached Bangalore at ~ 05:45, and though I had heard it was cold, it didn’t expect it to be _this_ cold:

Brr.  Anyhow the rest of the day I was Rac’s place, just catching up, talking and wondering and discussing who is now at which place. Later on in the evening we decided to move to Amoeba for a game of bowling - and were er, disappointed to say the least once there. Being a holiday, and a weekend, there was a mad rush which mean a waiting time of 2 and half hours. For bowling. Yeah. Not too keen on waiting for that long, we didn’t bother signing up for bowling, rather went to the top floor where bunch of arcade games were there, played a game of throw-thebasketball-over-the-barrier and won a bunch of ticket :)) - handed them over to Rac for “later use” 😛

After the arcade gaming we moved out of Amoeba, and decided to grab something for dinner. We decided to go to Vaayu - The Sky Lounge. Vaayu was pretty alright -basically a open air/rooftop lunge bar. The music was so-so - they were playing “pop-hits” rather than anything theme based. We had the Non-veg platter which was basically several Mughlai cuisine based dishes. To compliment the non-veg platter we also had a pitcher of Beer, and were there for couple of hours just relaxing 🙂

After that we headed back home, and once at home were trying desperately to book some tickets for 3 idiots/ Avatar but unfortunately most of the theatres were full till weekend 🙁

The next day Prasad joined us. Being the lazy  bums that we are, we were just hanging out in the house till late afternoon, when we decided to move our lazy arse and head somewhere. We headed over to Sigma Mall at Cunningham Road and headed straight over to the food court. While over there, a little menu board with Mexican cuisine suddenly brought out a craving for Mexican food in me. Being in Austin, TX for a bit meant that I’d taken an immense liking for Mexican food and wanted to try it out. Seeing that I was going for this, Prasad & Rakesh also decided to go to the same place, while I ordered for Quesedilla, Prasad and Rakesh went for Enchilada. Uh-oh. Bad move . I should’ve stuck to McD’s or something. I was cursing myself for going for these, and I can only imagine how much Prasad and Rakesh were cursing me. -.-

After stomachs (half) full, we went roaming about the mall a bit, and then to the Reliance timeout store for a bit. All the staring-at-widescreen-ultra-large-TVs-I-cannot-purchase was getting kinda boring, so we headed over to Funcity for a game of bowling. Meanwhile - Ashwin informed me that we would be leaving office and we would meetup at Windsor Pub, which was pretty close ( just around the corner, actually) from our current location.

The bowling game was meh for me - I started out OK but then things got rather embarrassing.  We wrapped the game, and Rakesh, Prasad and me headed over to Windsor. Upon reaching there we found that Ashwin couldn’t quite wait for us and started off on Beer & Fries already (grr..). After the initial introductions, Ashwin informed that 2 of his buddies, Paresh and Shreenidhi would join us. We had a great time (well I hope the others did, I surelt did), talking about music, work, life over Beer, French Fries, Fried Squid Rings(which nearly choked Shreenidhi 😛 ), Rajah’s Special, Fried Fish(Pomfret to be specific) - good times indeed . 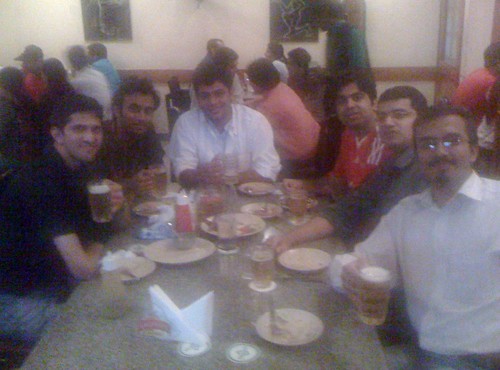 Being an avid travel addict that Ashwin is, he mentioned about his desire to drive to Ladakh - to which me & Prasad expressed our desire to join in!  We spent few hours at Windsor, it was great meeting up with all of those folks!

We bid our farewells, hoping to meet again and headed back to home. The final day in Bagalore was nothing eventful, just more laziness, meeting more people and general mall roaming. Overall I had a great time in Bangalore - I got a chance to meetup with old classmates, some new folks, and I got my much deserved break 🙂

Well I’m back in Chennai again, night shifts as always 🙁

Will try to squeeze in a post about the previous year, till then - Ciao!