If you’ve been following me on twitter, you’d be knowing that I was due for a trip to Mangalore soon. Well it’s been couple of days since I’ve been in Mangalore, so I thought I’ll do a short post on what’s been up past couple of days.

Well lets start from my train journey from Chennai - my train was scheduled to depart at 11:30am, so I thought I’d leave at say around 10:45, and be at Chennai Central at 11(yup, it takes only 15minutes). However early morning at 6:30, I got a call from my colleague, Ashmita - she was due to leave for Bangalore by the 7am train - she told me about luggage and baggage check over at the railway station - after all, the events of past few weeks and the fact that, the day was India’s 61st Independence Day meant that security was heightened. This made me pre-pone my timings. So I left my room at 10:15, and reached the railway station. I was expecting huge queue for the baggage check, but surprising there was none - and the station itself was rather deserted - compared to Chennai Central standards atleast. Probably everyone left the previous day itself. Anyhow the journey was rather boring - no hot chicks, I was surrounded by aunties.

I reached Mangalore the following day at 04:45, about 15minutes ahead of schedule. Dad came over to pick me up from the railway station, and as we passed through the streets - Nostalgia hit me. Old memories of dad dropping me to school, mom collecting back, taking the bus at times flooded in.(yea the route to the railway station is the same as the route to my school). Reached home in matter of 5 minutes, and I was just going through papers, chatting a bit with my folks. My cousin bro and his wife from Bangalore had also dropped by, so that day was pretty much went in exploring the city.

After breakfast, having a shower and all, we(ie, my bro, his wife and me) decided to head out. We decided to go to Bharat Mall, but then decided to skip it for the time being and come back later. Next, we headed over to our Granny’s place in Urva - and boy-oh-boy, were we reminded of the good times. You see back when we were kids, all of us cousin brothers and sisters would come down to Mangalore during summer vacations for like one and a half months.Those times were absolute bliss, we used to roam about in the back alleys etc. We went to this temple called Panchalingeshwar temple, another place we used to frequent during our carefree-days. 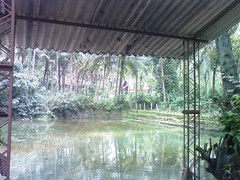 From there we headed onto Sultan Battery. Though its an ASI protected monument - looking at it you’ll never guess it is one. The monument is in one BAAAD shape. The day ASI took over it, it was given a pathetic White/Grey coat of paint, and then on no maintainence whatsoever. I’ll let the Wiki link explain more of the history for you. There’s also a small room which leads to a tunnel. Legend has it that the tunnel links direct’s to Tipu Sultan’s fort in Mysore. 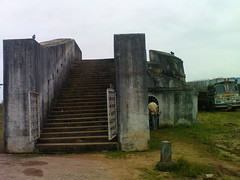 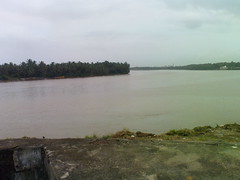 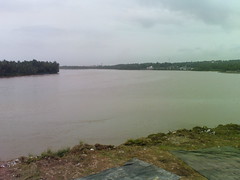 These are just the backwaters actually, you can take a boat from this side over to the other side, which leads to the beach.  We didn’t cross over, as it was pretty cloudy then and we didn’t want to take the risk. After spending a while over here(and watch couple of college people do their “romancing”) we headed back to my home. We stopped by Empire mall for a little bit, just to check it out.

The following day, I’d been to Kanhangad, Kerala as it was my neice, Shriya’s first birthday. You can check out some snaps and videos over at my Flickr photostream.

Some chances since the last time I visited

Maybe I’m cranky. Maybe I’m ranting too much, maybe I still want Mangalore to remain as it is. But then that’s me being selfish ain’t it? Regardless of how it transforms to, for me Mangalore will still retain its old charm. Next couple of days I’ll be meeting up with few old buddies, checking out some places, maybe drop by my old engineering college. Lets see. WIll keep posting the details