Few weeks ago, Jo & me went on a 11-day vacation from starting from Srinagar  heading south-west bound towards Manali via Kargil, Leh, Nubra Valley and Jispa. During this 11-day visit, we had a blast, met bunch of great folks, visited some breathtaking places and ran into wee bit of trouble. And since it’s been awhile since I posted here, decided to do a travelogue.

The tour was supposed to start from Sringar on July 31st and return to Delhi on August 10th, with overnight halts at Kargil, Leh, Nubra, Pangong Lake, Jispa and Manali.

The 4 of us (Prasad, Shyamala, Jo and me) decided to reach Srinagar a day early so that we could have some time to explore Srinagar.

I booked the flight to Srinagar pretty early - actually a good 4 months before our journey so I don’t have to worry about not flights not being available later or flights being out of my price band. The flight was to take off at 06:15 and land in Delhi at 09:00 with a follow up flight at 13:20 and land in Srinagar at 15:00.

Not wanting to take a chance against Bangalore’s famed traffic, I booked an Ola for 03:00. Trust Ola to screw it up, the cab guy was nowhere to be seen even at 02:50. I called up Ola Customer Care, they reassigned another driver… who also didn’t come. I had to call him up, wake him and plead him to come over. On the bright side, we ended up with a new Ciaz to take us to the Airport. The roads were empty, and the driver seemed to make full use of this by treating the road to the Airport like a racetrack and driving like one. We reached the Airport in a record breaking 40 minutes. If you think that’s too long - well, you’ll know when you’re here. 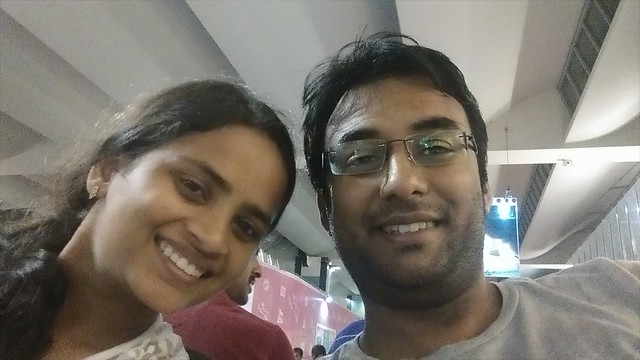 The Airport routine went without a hitch, Air India was on time and we took off and landed in Delhi on time. Once at Delhi airport, we went over to Starbucks, grabbed couple of coffees and chilled there for couple of hours.

When it was close to boarding time, went over to the gate. That’s when we realized that the flight was running late. To make matters worse, it started raining outside and visibility was almost nil. Once the cloud cleared and the plane had arrived, we were about an hour off time and by the time we landed in Srinagar and collected our baggage, it was close to 16:00.

Srinagar airport was under construction and the main hallway was blocked with either construction materials and barricades indicating construction zone. Result:  Fair bit of chaos near the baggage collection belts since only one was operational. I’m very paranoid about airlines losing my bags, so to see my bags among the first to arrive was a relief. We took a pre-paid taxi from the airport to our accommodation for the night, Welcome Residency. There was a fair bit of confusion about the hotel since Inbox pointed me to the Welcome Residency near Boulevard Road, while the one where we booked was at Shivpora. An email to the hotel and a quick reply from them ensured we landed at the right place. Srinagar was quite a bit hotter than what we expected, with the temperature at around 30 degrees. As our taxi driver drove through the crazy traffic(be it Srinagar or Bangalore, the road madness follows), we talked to him for a bit about what places to visit. He recommended us to visit the Gardens(Shalimar Bagh, Nishat Bagh) followed by a visit to Lal Chowk. As we drove through the traffic, couldn’t help but notice the rather broad presence of machine gun toting J&K Police and CRPF. About 45 minutes later, we reached our hotel, checked in and took a short nap.

Fresh from the nap, we decided to head out to explore some places around Srinagar. And despite it being around 6pm, it was incredibly bright - something that we didn’t expect. We walked for about a kilometer to find an auto(since the Hotel was a bit interior), found an auto guy who was asking Rs 350 to head to Shalimar Bagh. We had a deal with him to drop us off at Shalimar Bagh and he reassured us that there will be other autos for us to make the return trip. With not many choices around, we took the auto anyway. While on the auto, we did some small talk with the rick driver, asking him about his family, what places to visit around Srinagar, what places to visit to check the local cuisine and I’m not sure if it was the small talk or that we agreed to his fare without a question or something else, but once we reached Shalimar Bagh, he had a change of heart, he said that he felt it wasn’t right that he asked for Rs 50 more(claiming most would take Rs 300 to here) and told us that he’d be waiting for us outside Shalimar, but will take us only to Nishat and not back to the hotel. 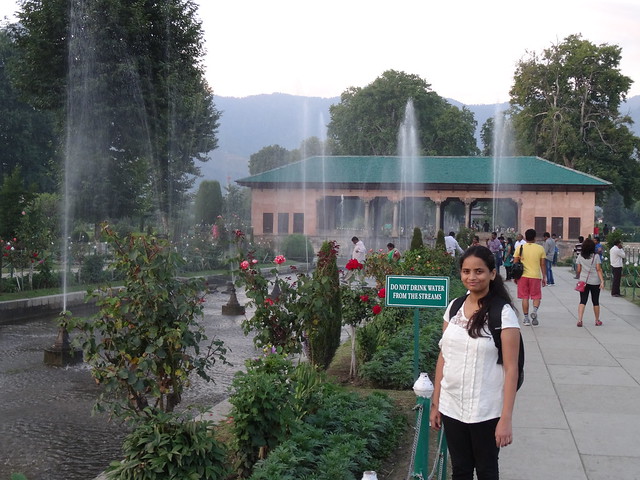 Shalimar Bagh was smaller than what we expected, with two parallel short walkway on either side of the fountains and lawn on both sides with few people sitting, looking into the horizon 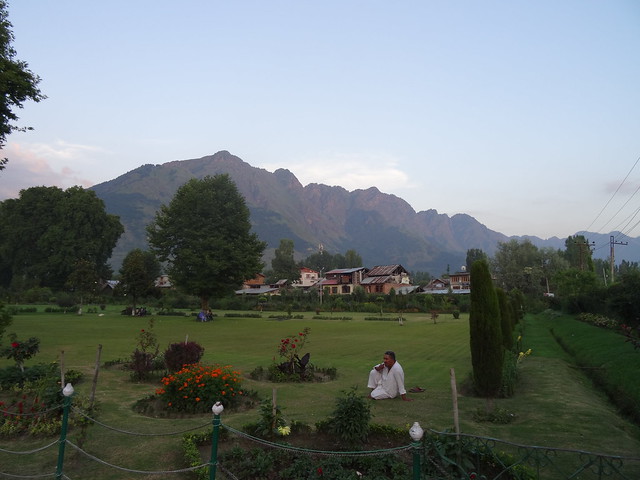 Done with a tour of Shalimar and some pictures taken, we headed out and called our auto rickshaw guy was waiting for us. He repeated his stance of feeling guilty and reinforced that he will drop us only till Nishat. With this expectation on, we headed back towards city via Nishat. Once at Nishat, we realized that Nishat is closed(later we realize that most gardens close post sunset, and it was about 7pm now). Our auto guy was flummoxed as to how this was possible, since he’d told us it’d be open till at least 8. We figured he’d let stop the trip here, but once again he changed his mind saying he’ll take us to Nehru Park, which is actually an island in middle of the Dal lake. Considering the traffic ahead, we requested him to drop us straight to Lal Chowk instead of Nehru Park as it’d been a long day and we decided to have dinner and head back to the hotel - half expecting him to decline. Much to our surprise again, he agreed, without saying a word of protest, repeating his earlier talk of feeling guilty and agreed to drop us to Lal Chowk for free. About 45 minutes later, we arrived at Lal Chowk, headed off into Ahdoos Hotel for some Mutton Seekh Kebabs, Roghan Josh, Rice and Rotis. The Mutton Seekh Kebabs were so yum, we ended up ordering another round of it. Post the awesome dinner, we decided to try Kashmiri Kahwa and absolutely loved it, capping off a fine dinner.