Last Thursday, we decided to bite the bullet and decided to go ahead with the trip. Although originally planned as a day trip, I felt that doing a trip till Madikeri, exploring nearby places and heading back wouldn’t be possible in a  day(or if indeed possible, it would be incredibly tiring) and decided to split it across 2 days.

Day 1 started with us leaving from home at about 6am. For most trips which involve us leaving the city, I prefer to leave as soon as possible, that way we can exit Bangalore city with least traffic and with the time saved, we can use the time elsewhere. This time again was no exception, we took the the Mysore road instead of NICE ring road and within an hour we were at Bidadi and stopped by Adyar Anand Bhavan(A2B) for our first pitstop. 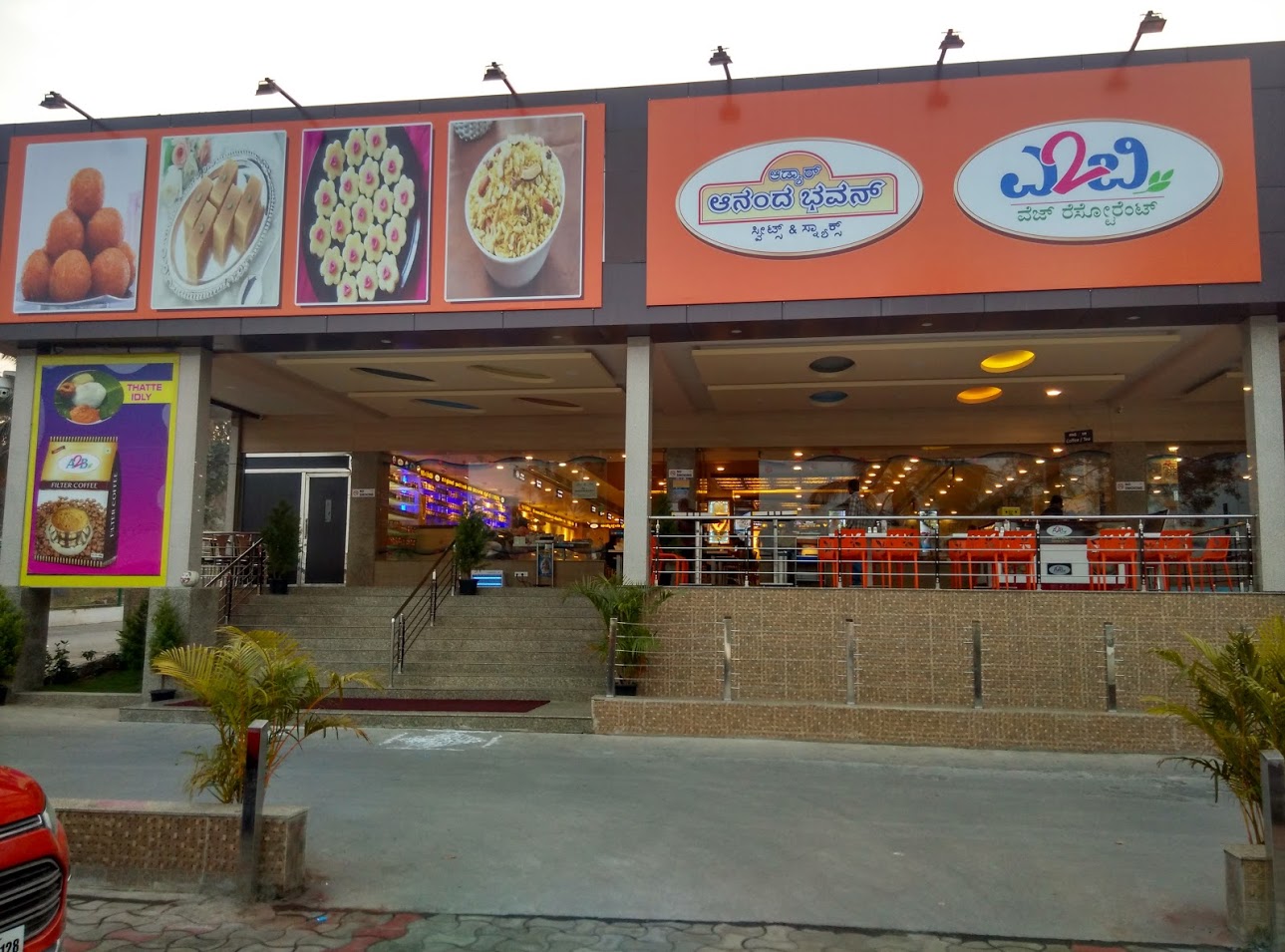 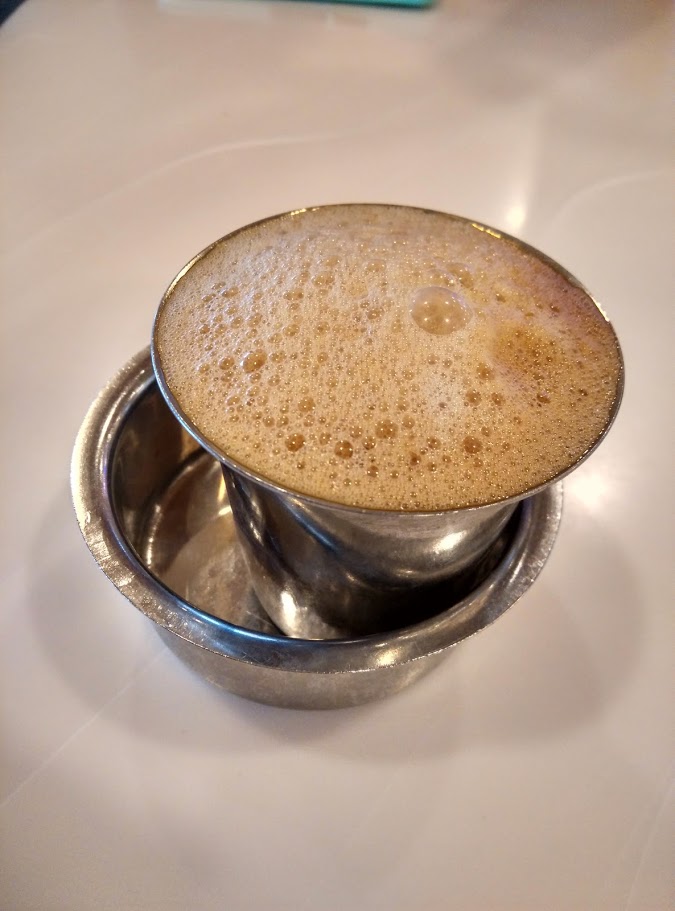 Bellies filled and caffeine kicking into the system, we started on from A2B. The last time I took the Bangalore - Mysore highway, the umpteen number of speed breakers, especially after Mandya was really annoying. Thankfully, now majority of the speed breakers have been removed. On the flip side, they have been replaced by Nakabandis - and I almost hit them couple of times thanks to trucks blocking the path and my sight till the last minute. With lack of reflectors on them, these will be a huge liability during night.

The drive was event-free and we reached Srirangapatna at around 9:30am and went straight for Tipu Sultan’s Summer Palace(aka Daria Daulat Bagh). There wasn’t anyone around, spare for a bus full of school kids. Parked the car, paid the entrance fee (Rs. 5 per person, no extra camera charges) and started exploring. 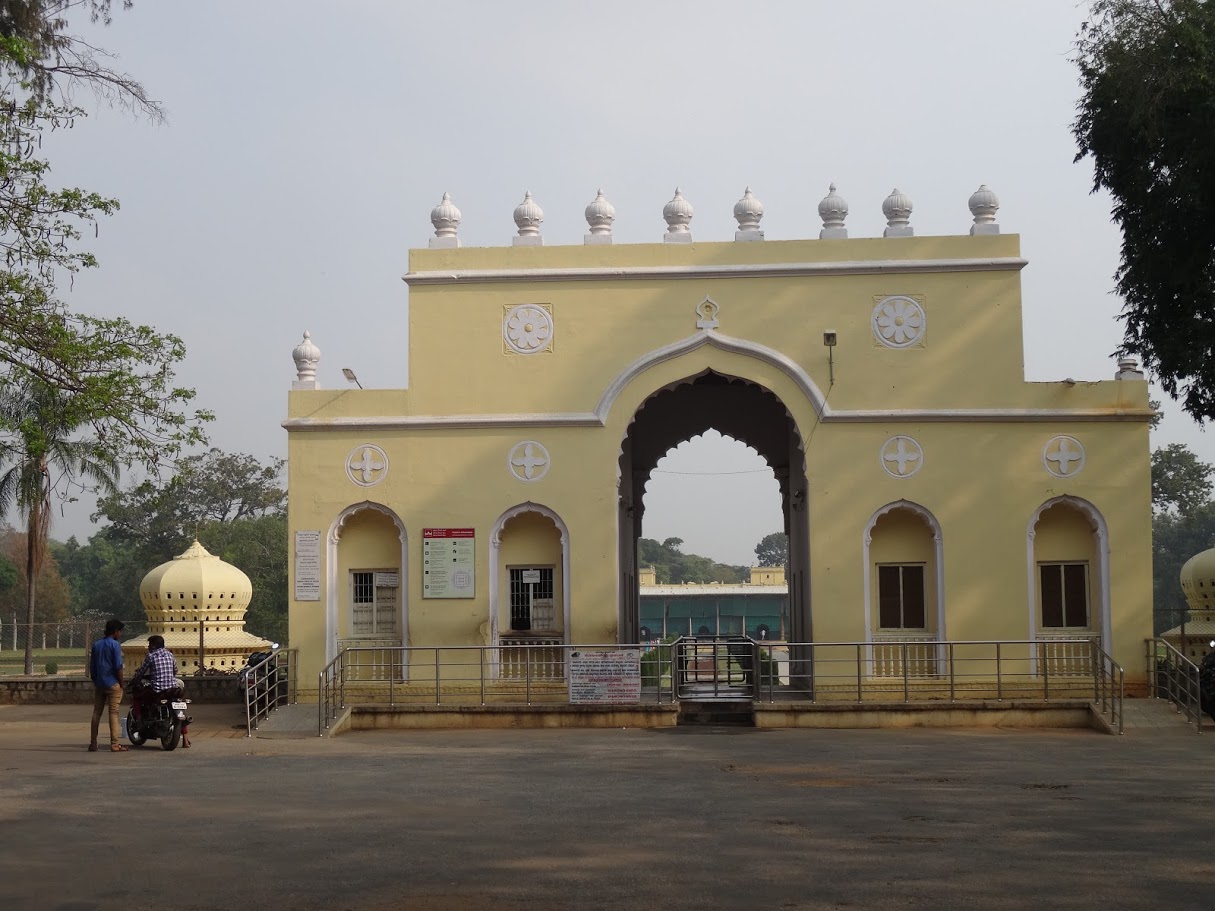 There were some repair works going on, so we had to enter the palace via a weird side entrance route. Once past this, the grand gardens welcome you 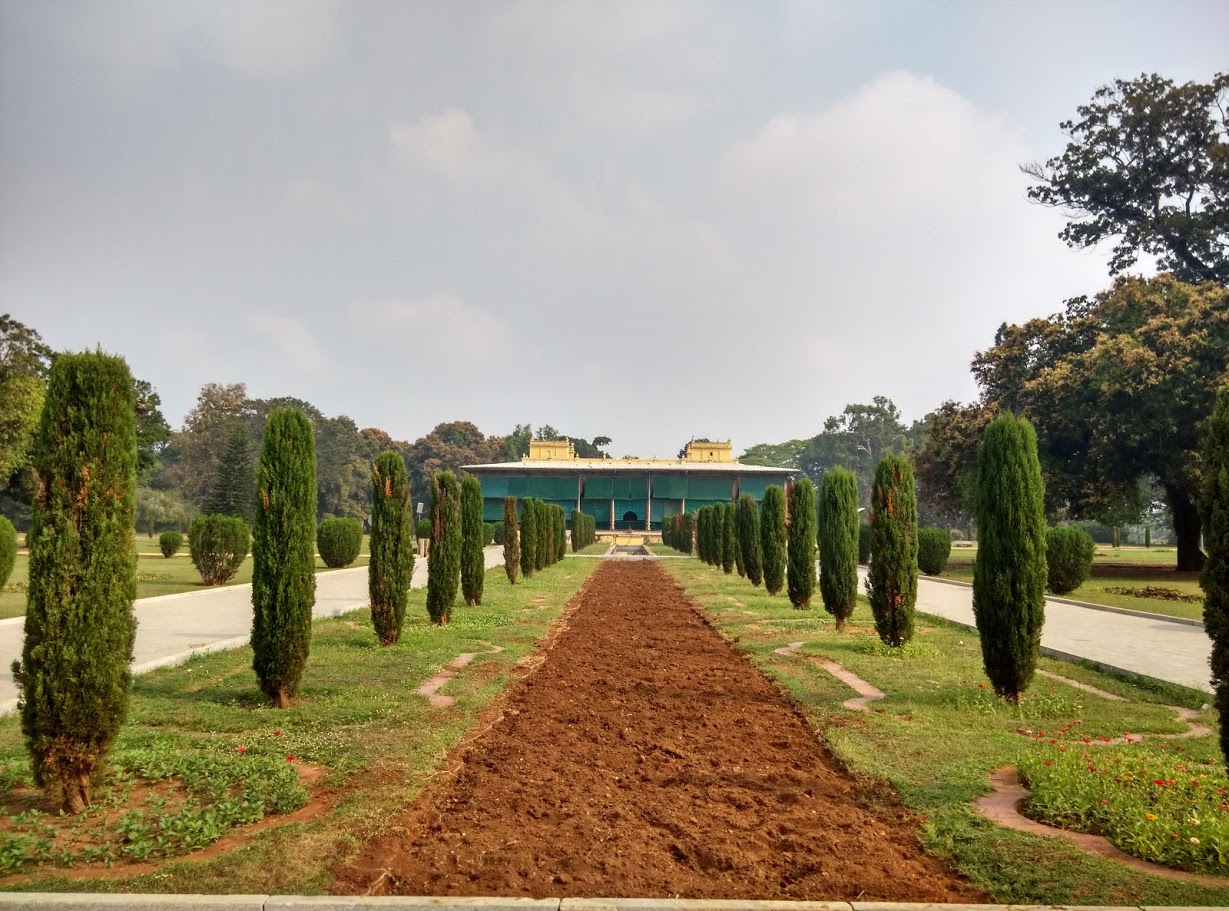 The gardens had some other guests as well.. 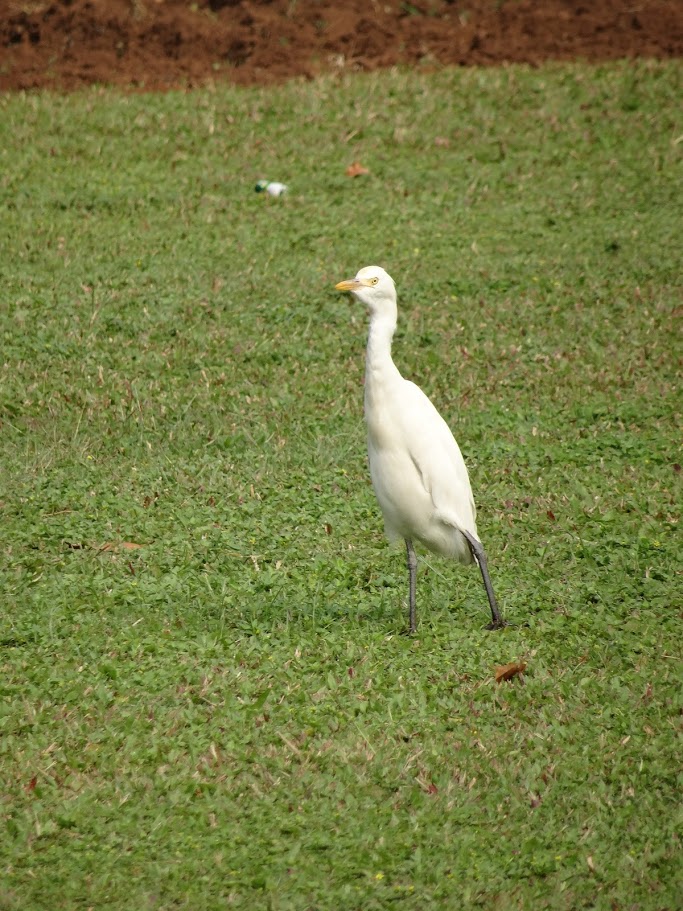 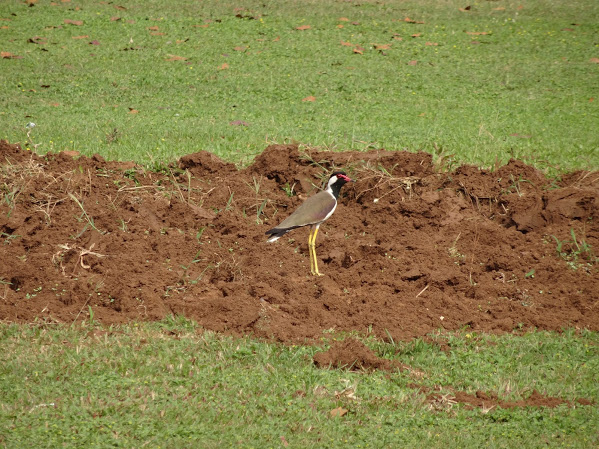 The chirping of birds with the silence because of lack of people around perked our moods up. Once you cross the gardens and walk into the palace, the sheer brilliance of the architecture and paintings on the walls astound you. We weren’t allowed to take any pictures of these, but they will leave you spell bound. In addition there are quite a lot of framed sketches, paintings, portraits of Tipu’s fight against the British, his sons', his trusted advisers and other things such as coins and inscriptions hanging by the walls mean you can easily spend couple of hours in the palace without knowing how time flew by. We spent about an hour here and just as we were about to leave, tourists had started to pour in.

From here, we started towards Ranganathittu Bird Sanctuary. With the distance being just over 6km, it didn’t take us long to head here. You’ll see a big welcome board when you’re close by

Once past this, there's separate entrance fee for vehicle(Rs 30 for car) and for people (Rs 60 each). Remember to keep this ticket with you, even after exit- the forest official insists on you returning back the ticket while the ticket explicitly says this should be avoided.
Once in, there are quite a few benches on the shores of the river and it's pretty common to see photographers with their huge equipment sit down there. We headed off for the boating, which cost Rs 60 per person. If you want you can take an entire boat for your self or go on a shared boat. We opted for the latter and thankfully, we were the last to board and didn't have to wait before starting off. The officials will ensure that they don't start unless all the folks have worn lifejackets.
The boat ride is incredibly relaxing. The pilot is well aware of the different types of birds and will point and explain the names of the birds and their habitats. There were quite a few crocodiles basking in the sun. 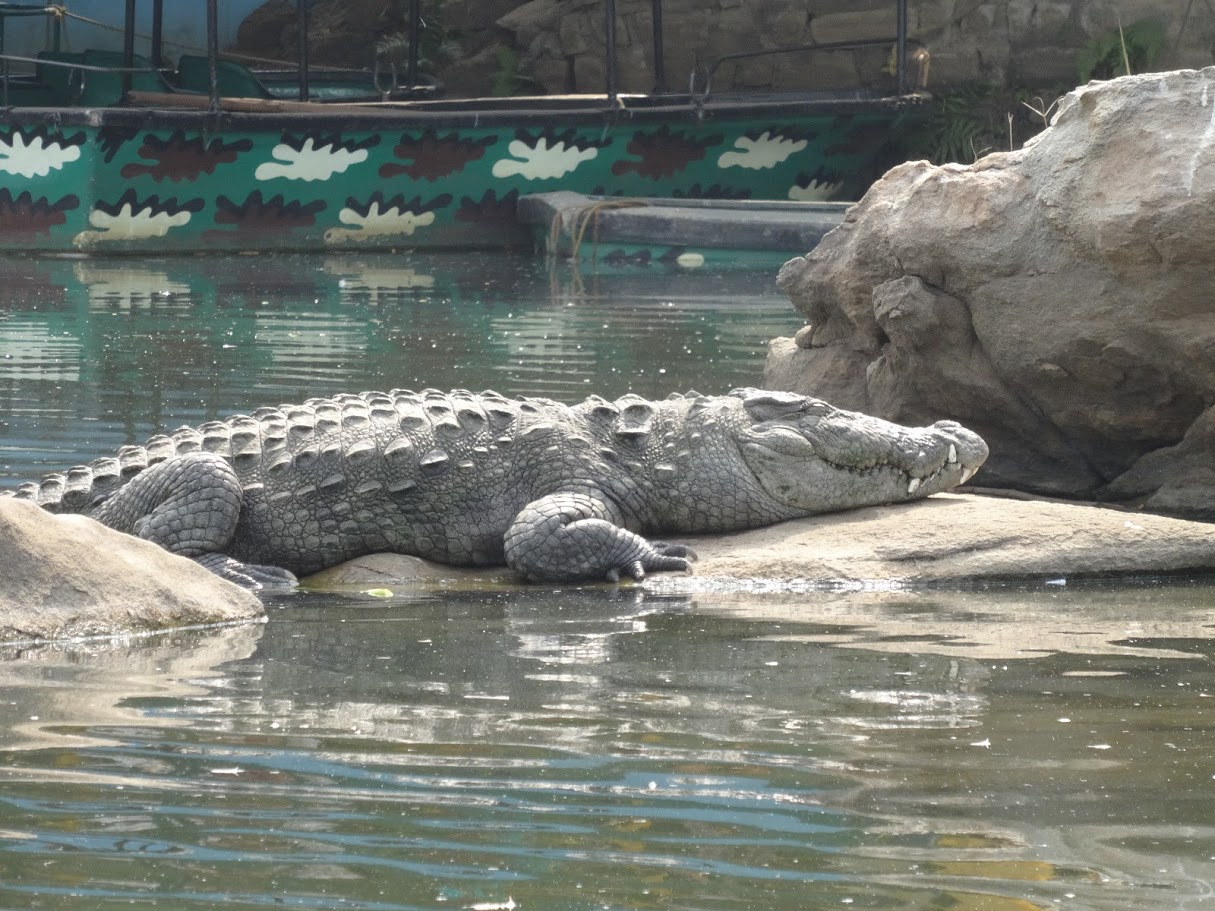 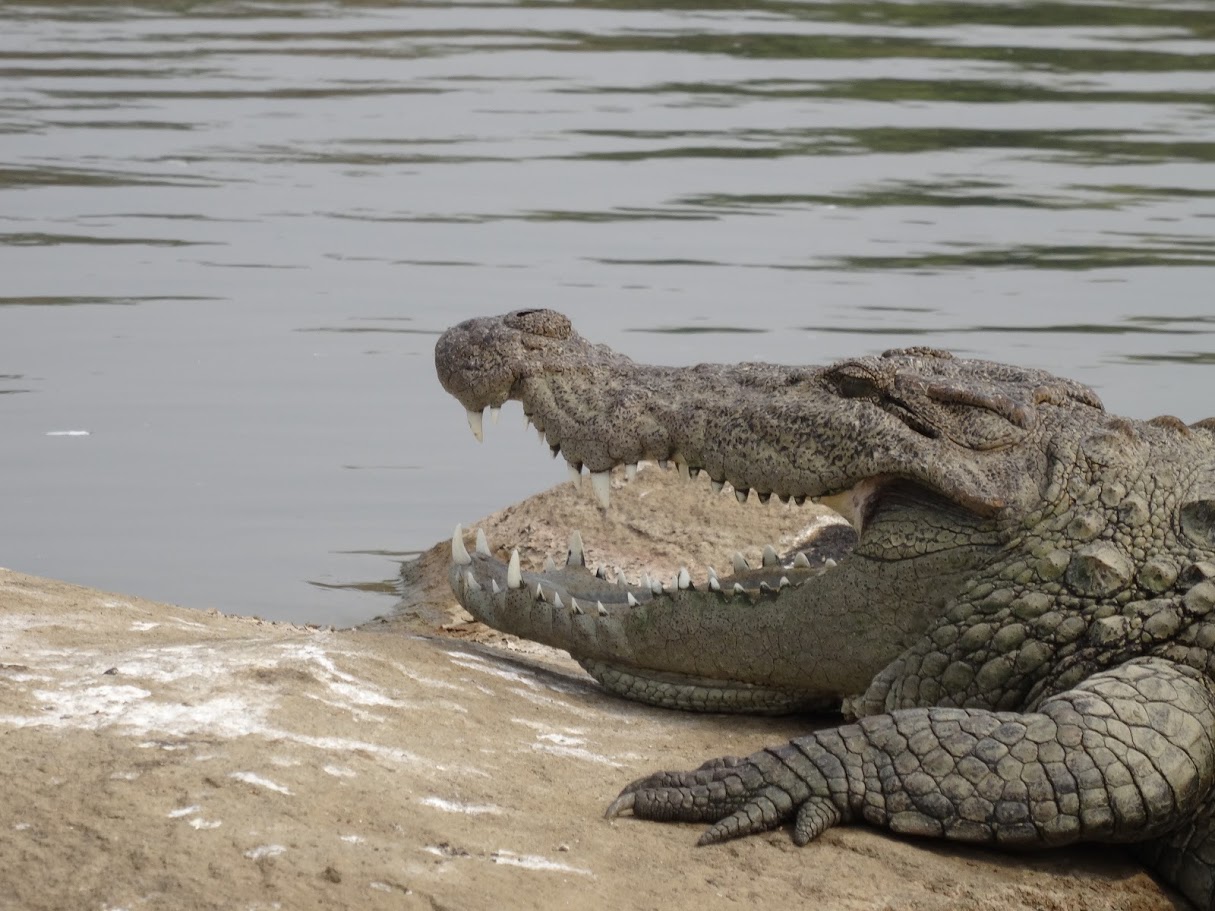 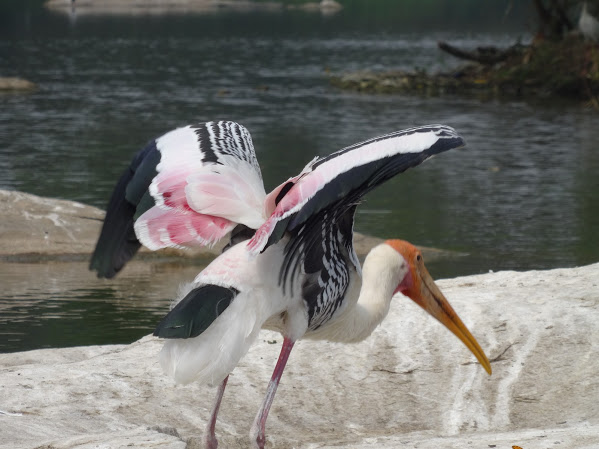 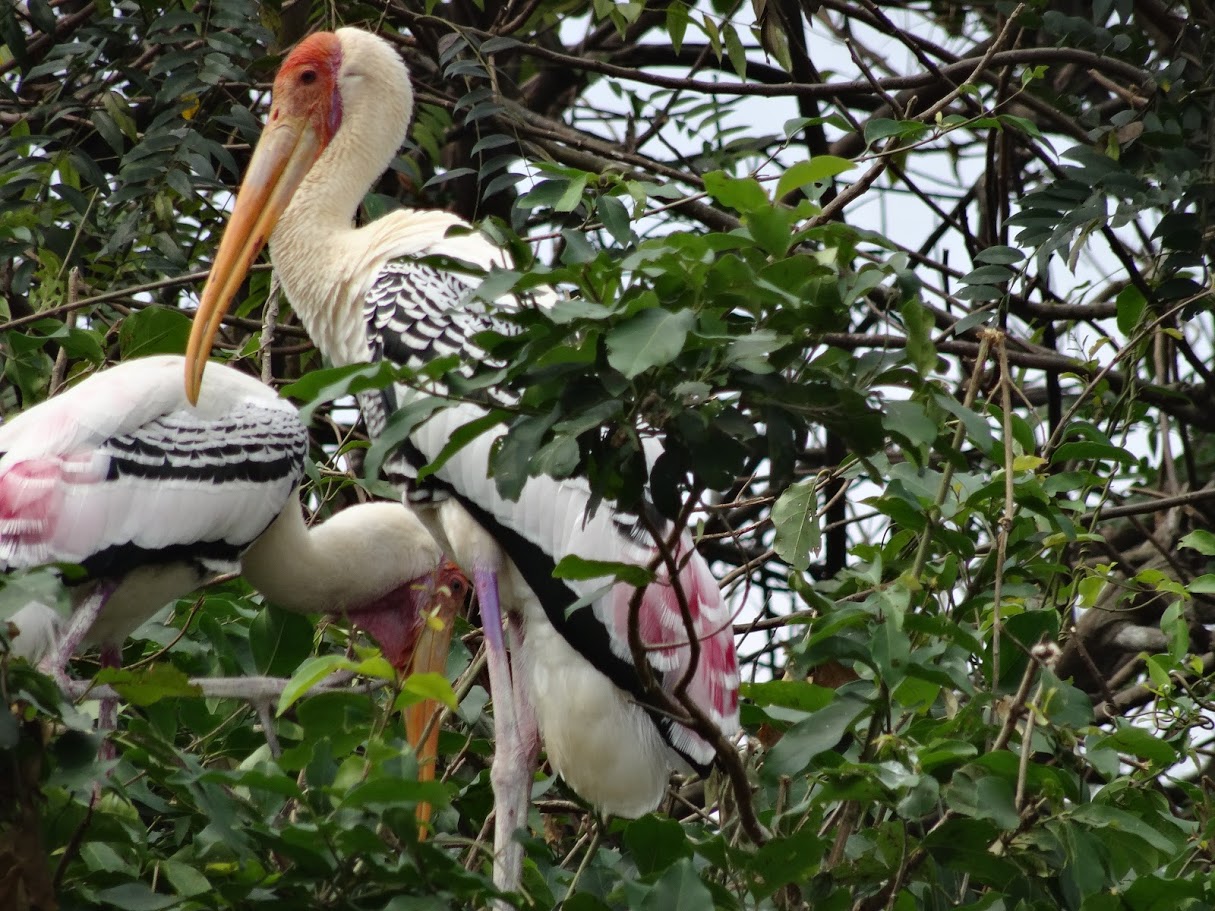 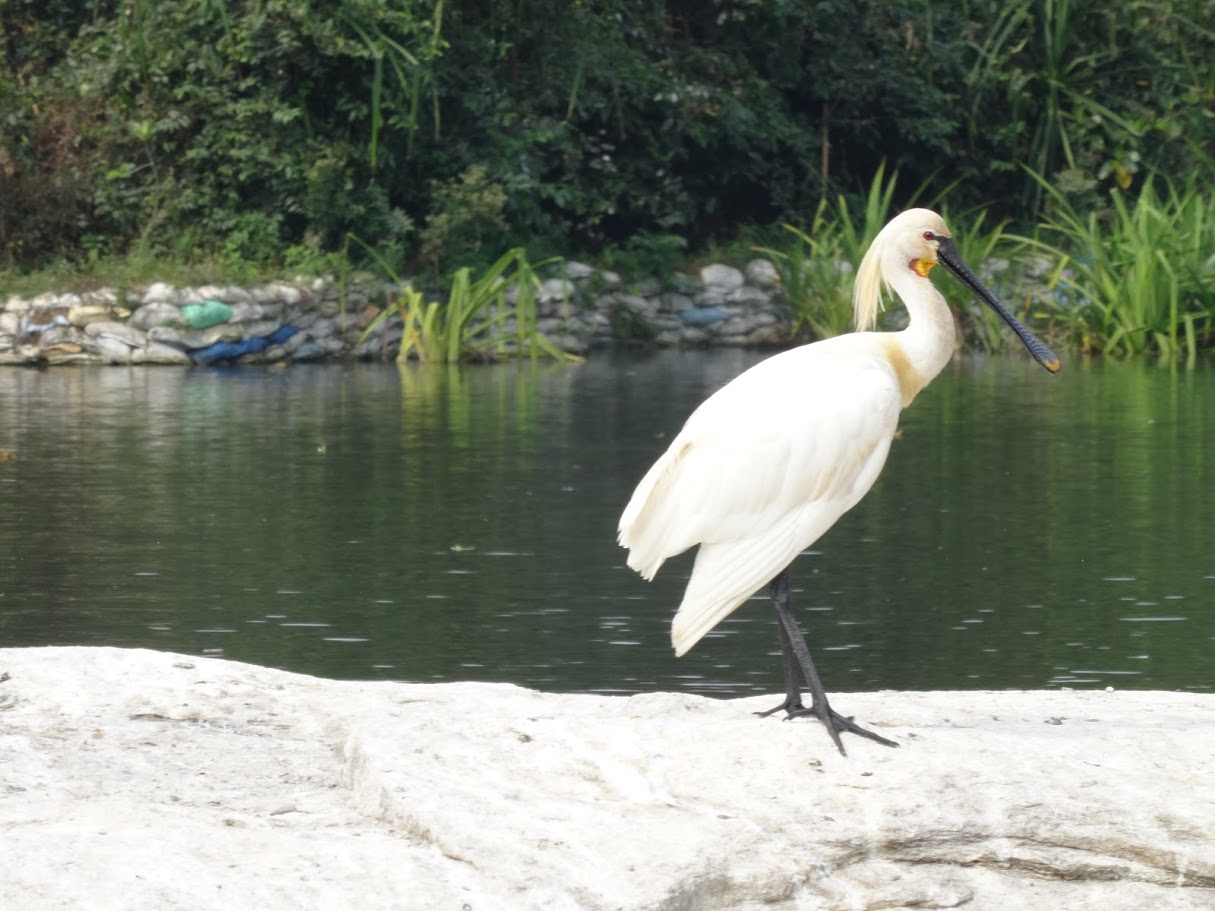 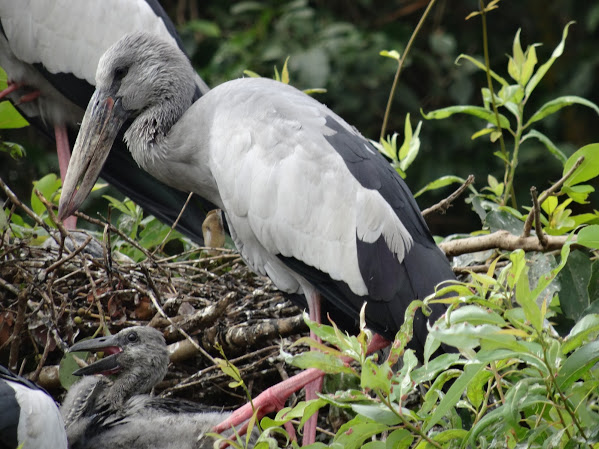 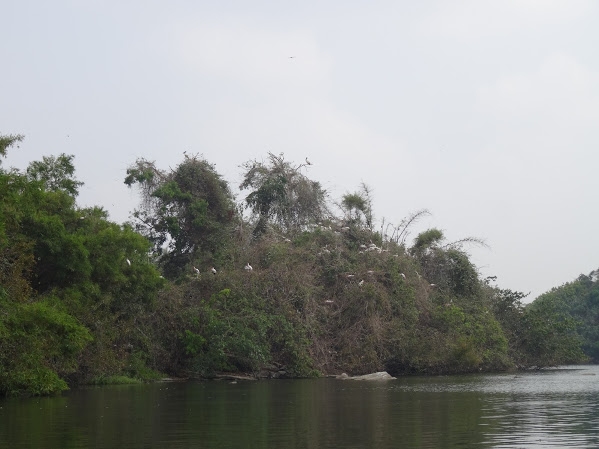 The boat ride took about 20 minutes, though we’d have preferred it to be bit longer. We took a small walk across the sanctuary and then started to head towards our hotel. The road again from Srirangapatna to Kushalnagar was really good, barring the first few kms from Ranganathittu were it was pothole central. 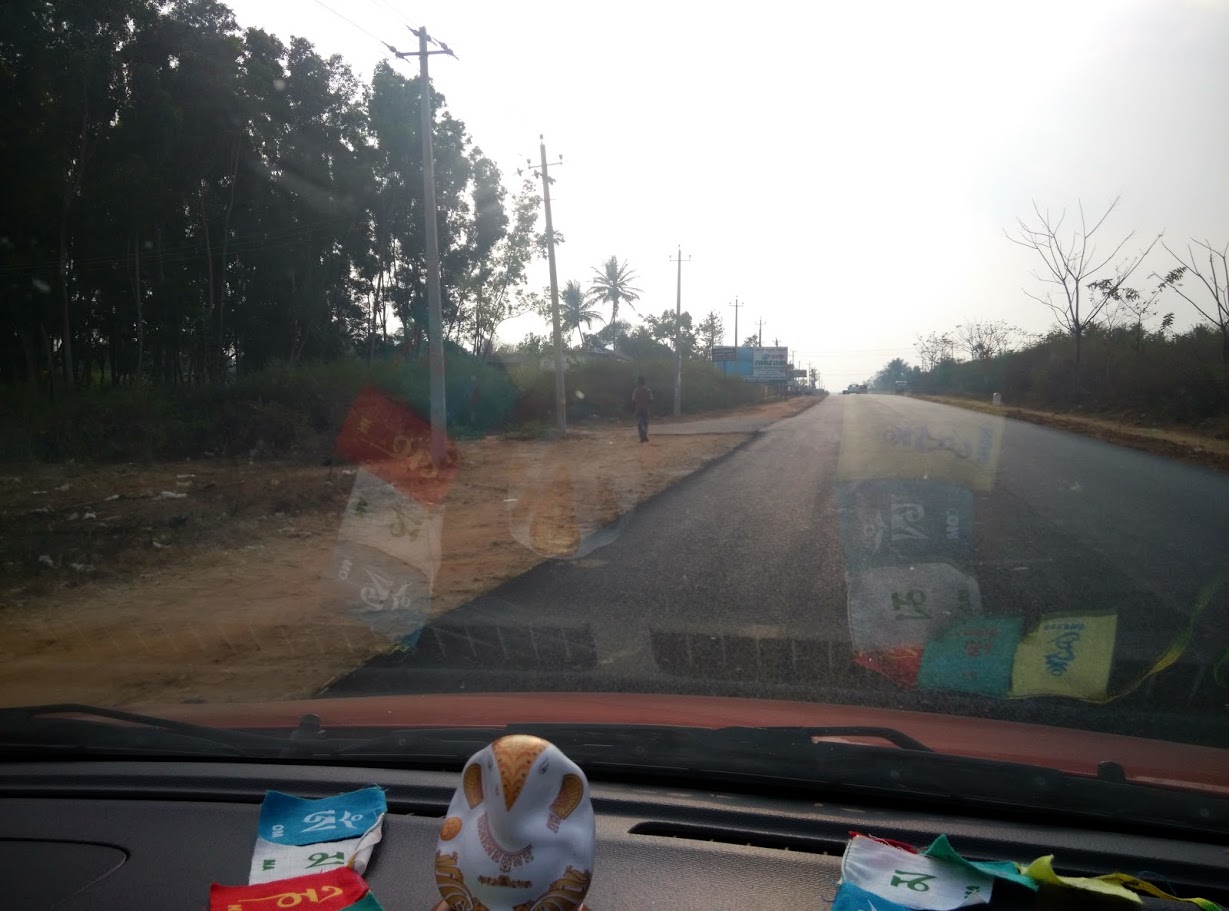 It took us about 2 hours to reach our stay, Palm Era Resorts.

Palm Era was a nice place to stay - it was just off the main road and surrounded by lush greenery and was quite serene. 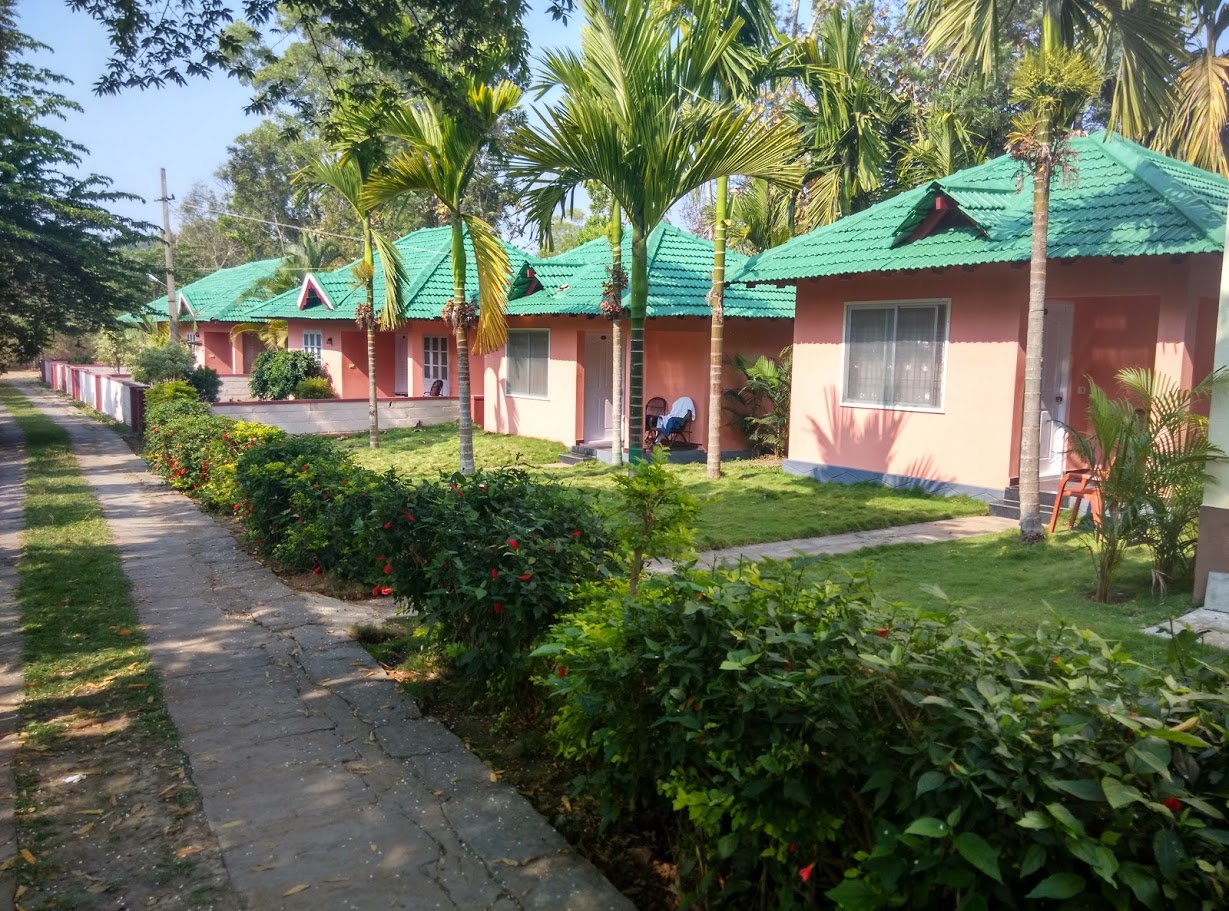 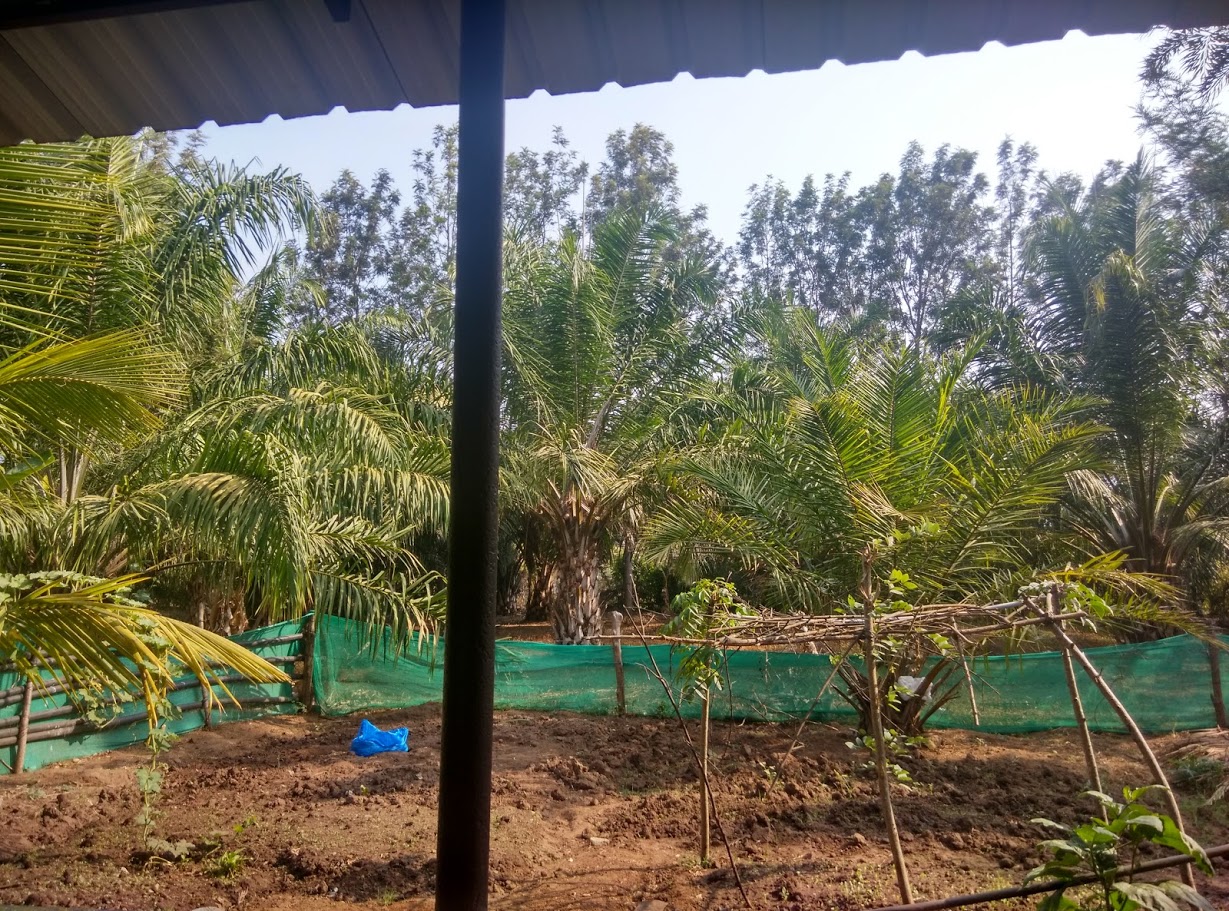 We had originally planned to check-in, grab some lunch and head towards Bylakuppe but were a bit tired from the morning drive + walk around the above places and decided to take a nap and push Bylakuppe trip for the next day. Instead, we decided to head towards Madikeri later on in the evening and watch the sunset from Raja’s Seat.

The evening drive from Kushalnagar to Madikeri was more fun thanks to lot of twists and turns of climbing the mountains - as a driver I always prefer taking ghat roads as it keeps me more engaged than straight 6-lane highways. We reached Raja’s seat in about 30 minutes and the sheer number of cars parked made my jaw drop - didn’t expect that many cars. Raja’s seat had an entrance of Rs 5 person & a parking fee of Rs 10. While it sounds grand, Raja’s Seat is pretty much a small garden. Don’t let that fool you, however - the view was pretty awesome 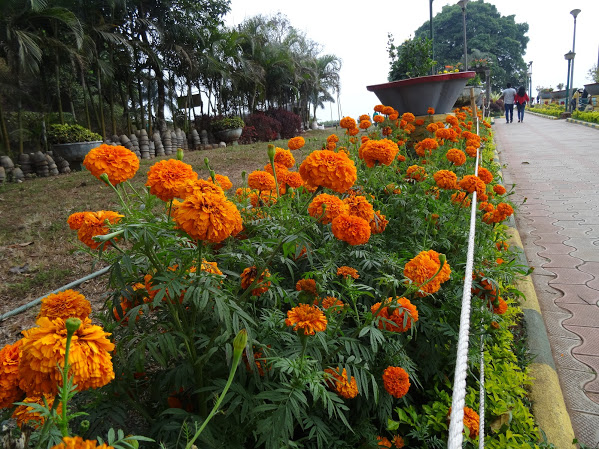 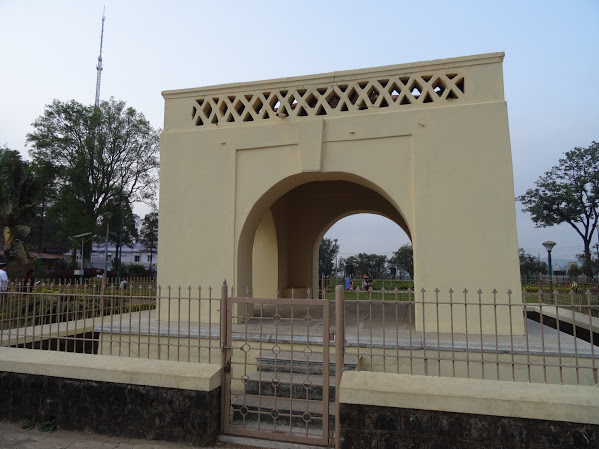 Due to the clouds and fog, we couldn’t grab the best sunset view but what we saw was good enough.. There was also a Toy train track(for kids and adults) but it was not operational when we visited 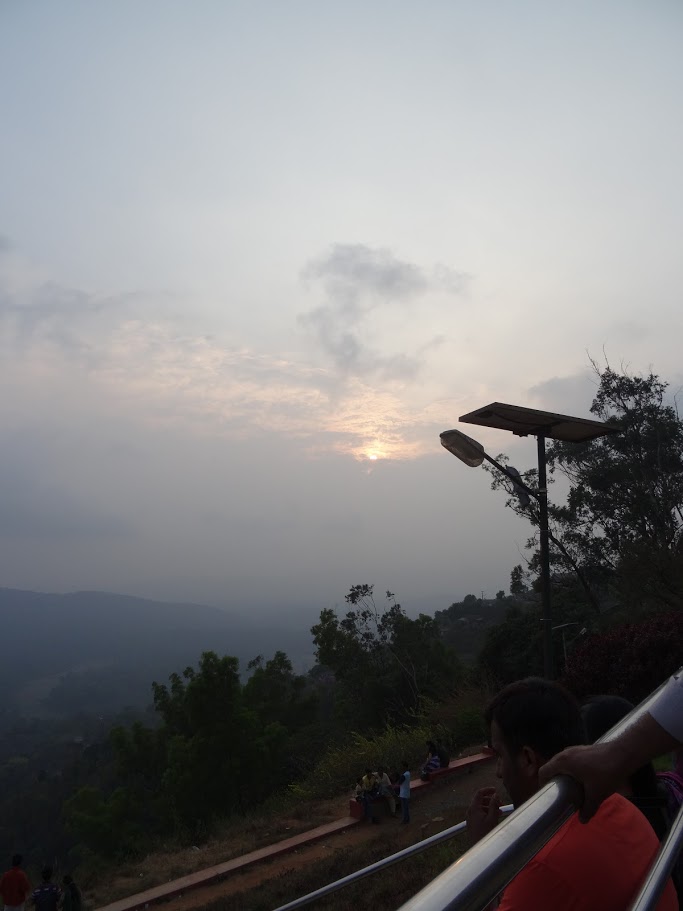 With darkness falling, we grabbed some Charumburi and head towards the town centre in search of places where we can get home made chocolates and fruit wine. After walking around for a bit and asking multiple shops, we finally got a shop.. and stocked up. 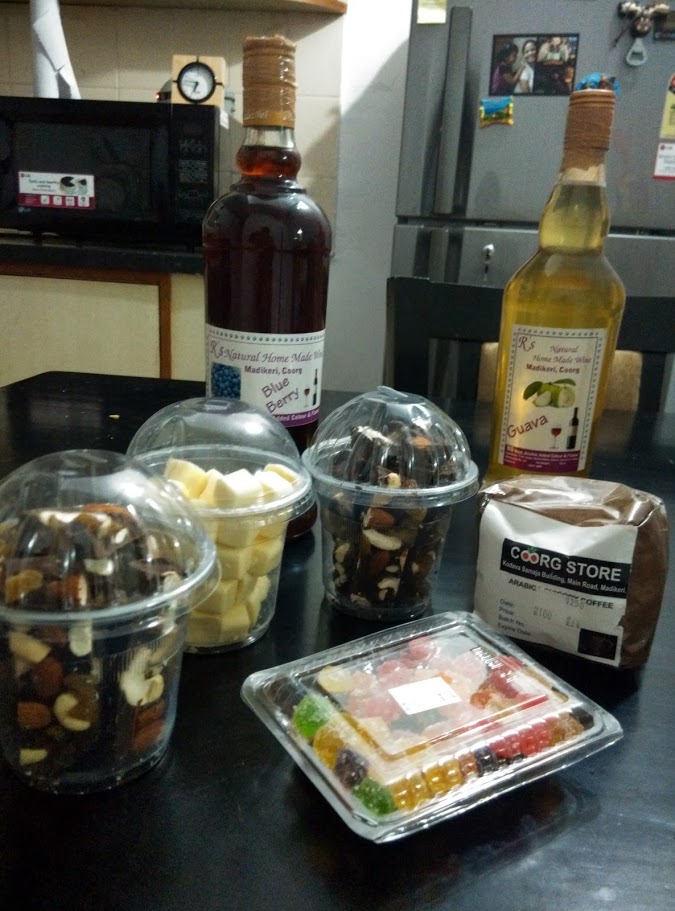 With us still full from Charumburi, we decided to head back to our resort and have dinner there. The drive back, however was a bit scary since it was pitch dark with absolutely no streetlights whatsoever. Thankfully the board leading to our resort was lit and we didn’t have any problems reaching.