Salut Bucharest - How and Why I moved from Bangalore to Bucharest

It’s been a while since I posted anything, so lets get this started again. As I had tweeted few weeks back, I have moved to Bucharest, Romania.

Signing off from Adobe https://t.co/GLyPfdLPBE's been a wonderful https://t.co/BQINCxTPWS a book published, became an AWS Community Hero & learnt a lot more.Onwards! (@ Adobe Systems in Bangalore) https://t.co/Hkgry8ldIO

So some of the obvious questions would be:

Let’s take on them one by one:

To which I say why not? I’ve been looking at moving out for a while now, and the US was never an option, especially with the current visa situation (and Jo not being able to work with a dependent visa). Europe is what Jo and I had been looking at since a while. I’ve been working with my colleagues from Bucharest, Romania since past couple of years and this gave me a chance to bring up a internal transfer request within my team. With the approvals in place, we were finally able to start the process. However, as with immigration & inter-country transfers, this was just the start of a long road of lots of paperwork and documentation shuttle.

How did it happen?

Immigration and work visas are never easy, and Romania’s visa/work permit process wasn’t a piece of cake either. Before the visa process could begin, I had to get a work permit - which can be only done by the employer. And for applying the work permits, I had to get a “Criminal Record” aka PCC/Police Clearance Certificate, Transcripts from my University, my Degree certificate and my previous experience certificates - and I had to get them Apostilled too!

One of the many TIL moments was about Apostille:

A certification under the terms of the Apostille Convention is called an apostille (from Latin post illa and then French: a marginal note) or Hague Apostille. It is an international certification comparable to a notarisation in domestic law, and normally supplements a local notarisation of the document

The good thing was most of these documents were well catalogued and saved (I have almost everything digitised with multiple backups) and the ones that needed to be done, namely the transcripts and PCC, I could apply for these online.

For getting the documents Apostilled, I went to Superb Enterprises at Infantry Road, Bangalore. I visited them the first time solely on the basis of Google reviews and then kept going back (I had to get the documents apostilled multiple times, especially the PCC due to delays in paperwork) because I really liked the service. They also gave a link where I could follow the status of the document - which is fantastic for someone who’s just a little bit paranoid about things getting lost like me.

The work permit took about a month, from the date of application to collection, other delays such as sending documents to Bucharest, Romania resulted in a much longer time frame though - close to about 3-4 months). Once I had the work permit, it was time to apply for the visa. Here’s when things got a lot more painful: Romania has just one embassy for all of India, Bangladesh, Nepal. It gets better: it’s in Delhi. Even better: they accept documents only from 10 am to 12 pm, and used to be closed for collection on Wednesdays(this is no longer the case, however). From my previous experience with the Embassy, although the visa application is to be submitted online, you still need to visit the embassy with the originals. Even worse, the submitting the documents online doesn’t give you an appointment date, and the application submission at the embassy used to be on a first-come, first-serve basis. This meant the first time I went to the embassy 2 years back, I was at the embassy at 6 am (even though the time for document submission is not before 10 am), standing and waiting outside. Thankfully, this is changing now - first-come, first-serve is no longer encouraged and the people at the embassy ask for people with appointments and interviews first and only when interview and appointment pool is done, they ask for others.

However, this bit of information is still not well known and the embassy website still encourages first-come, first-serve - and if you follow this, like me, you’ll just end up wasting a whole lot of time. Another pain point is that even though the embassy now encourages visiting only after getting an appointment, there doesn’t seem to be any automated way of getting an appointment - when I visited the embassy and stood for hours, the embassy official noted my file number and scheduled for an appointment for 5 days later. I wonder if/when I would have gotten the appointment, had I not gone and stood at the embassy - especially since the work permits are time bound - ie, the visa application for the work permit must be done within 2 months of the work permit being approved else it expires and a new work permit must be applied for - which needs a new PCC because that also has a limited eligiblity window - you see where this is going?

If that was not enough, among the documentation requirements, one the most annoying ones was the bank statement - a simple online statement was not enough, it had to be stamped by the bank authorities and it had to be not older than two(!!) days. Imagine having an appointment for Monday but can’t get the documents because Saturday was a holiday? So frustrating, moreso if there’s no bank branch nearby.

Thankfully, the embassy officials didn’t have any problems with the documents that I had submitted and visa process, once I had the appointment went quite smooth. I’m ever so grateful to Daaku and Mrs Daaku for graciously hosting me for 10 days while I was trying to sort out the visa hassles.

Unfortunately, due to time constraints and a work visit that was to follow, I had to cancel my visit to Australia for the AWS Community Day and APAC Leaders Meet. Hopefully, I will get to be there next year.

The Move and Settling In

With visa and flight tickets confirmed - the next challenge came in about moving and what exactly to be shifted. Jo and I created a Trello board making a list of our possessions and what should be moved right now/later/never at all. We’ve been using Trello for organizing a lot of things which has made our lives easier and this was no different. They say a picture tells a thousand words so I’ll get the below image do the talking. 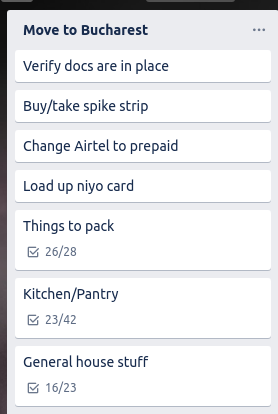 If you find this screenshot useful - check out the Trello template I have created using this.

For finances, instead of using a forex card, I purchased a Niyo card. Why Niyo? Niyo was heavily recommended by several people. Niyo is eseentially a prepaid, standard debit card with support for forex payments. The difference is that Niyo doesn’t charge any forex markup fees and uses the prevalent VISA exchange rate at the time of settlement. Notice the word “settlement”? Not all transactions and settled right away and you may see some minor differences (positive/negative) as the forex rates are never constant. I haven’t seen any extra charges, so they have remained true to their word. I’m not sure what their business model is, since I got the card for free and we all know nothing free runs forever. However, so far my experience has been positive and I used the Niyo card for well over two months in Romania and in US. Immigration and moving to countries takes a significant toll on your finances and we could weather these thanks to You Need A Budget (YNAB). With YNAB, we reserved a portion of money month on month with certain assumptions on how much capital is required for things like day to day expenses, rent, maintenance, security deposit - we arrived this with a little bit of research on the Internet and asking my colleagues for some rough numbers. I’ll have a separate post on how YNAB has been a lifesaver at a later date.

Next up, telephony: I have an Airtel Postpaid family plan which means both Jo and I have separate numbers with a unified billing. the plan we’ve had has generous data limits. I looked at enabling International Roaming with the IR Packs but roughly Rs 4,000 per month for 5GB of data and 500 minutes of calls to India, it was just too expensive and anyway without the roaming packs, you still get incoming SMS for free (which was the primary criteria for exploring this option), I decided against getting an International Roaming pack and decided to rely on Airport WiFi for booking Uber and buy a SIM card locally.

Once the final list of stuff to be packed was done, we spend few of the nights leading to the flight date organizing, bubble-wrapping and packing things. It wasn’t till late till I realized that the free baggage allowance policies for airlines on routes to Europe is much lesser, as compared to routes to US - which means we ended up reshuffling and leaving behind some of the things I orginally intended to carry. And to make matters worse, some airlines (looking at you, Qatar Airways) have started weighing in the carry-on baggage as well and as a result, I ended up spending roughly Rs 12,000 in extra baggage fees ($30 per extra kilo, I ended up with 5 kilos over the limit, despite Qatar’s generous allowance of giving me 2 kilos over the allowance for free).

Post arrival in Bucharest, I had accomodation in a nearby hotel for two weeks and I started looking for a place to stay in. I had couple of priorities when it came to house hunt:

Try to find a house which is:

Expanding on the second point: In my previous visits to Bucharest, language has been somewhat of a problem and more important,applying for my resident permit and family unification requires some official paperwork and my thought process was that if the owner is known via a colleague, it would make getting these documents significantly easier. Luckily, I found a house which is about 10 min walk from office, has all the nice things nearby (supermarket/mall/couple of drinking holes) - and my landlady has been very helpful in more ways than I can count on.

It’s been couple of months now, I’ve sort of settled into the groove, re-built my desktop. I’ve have more posts soon - have a lot to talk about.