Another year has come and gone by. With vaccinations being made available at the start of the year, we thought the pandemic would be over by the end of the year. But with different variants and mutations, it’s continued, and daresay gotten even worse. Hopefully 2022 will be the year of the saviour, but till anti-vaxxers exist, I don’t see that happening.

Here’s what happened in the months:

January: January started with a lot of promise - vaccinations were being administered to healthcare workers in Romania. The Romanian embassy in Delhi finally started issuing appointments for family unification visas, and Jo got an appointment for the first week of January. Flew to Delhi, only to be told to come back later as her flight date was too far in the future (April end). Felt like crap. Snowed a bit in Bucharest. Felt nice to get out of the house to walk in the snow (I rarely used to head out because of my paranoia of catching COVID).

February: Jo traveled again to Delhi for her appointment, and it went well! No problems and was approved, and she collected her visa stamped passport! Went to meet some colleagues for a board game evening. Was fun!

March: Romania started vaccinating the public, and I signed up and got myself registered in the portal! My team mates told me of a new vaccination center that was set up in the Romexpo exhibition center, and because of this I jumped the queue and got a vaccination date. Was really worried about whether I may be vaccinated, about the side effects, and all of that was for nought. The vaccination process was smooth and didn’t have any bad side-effects. 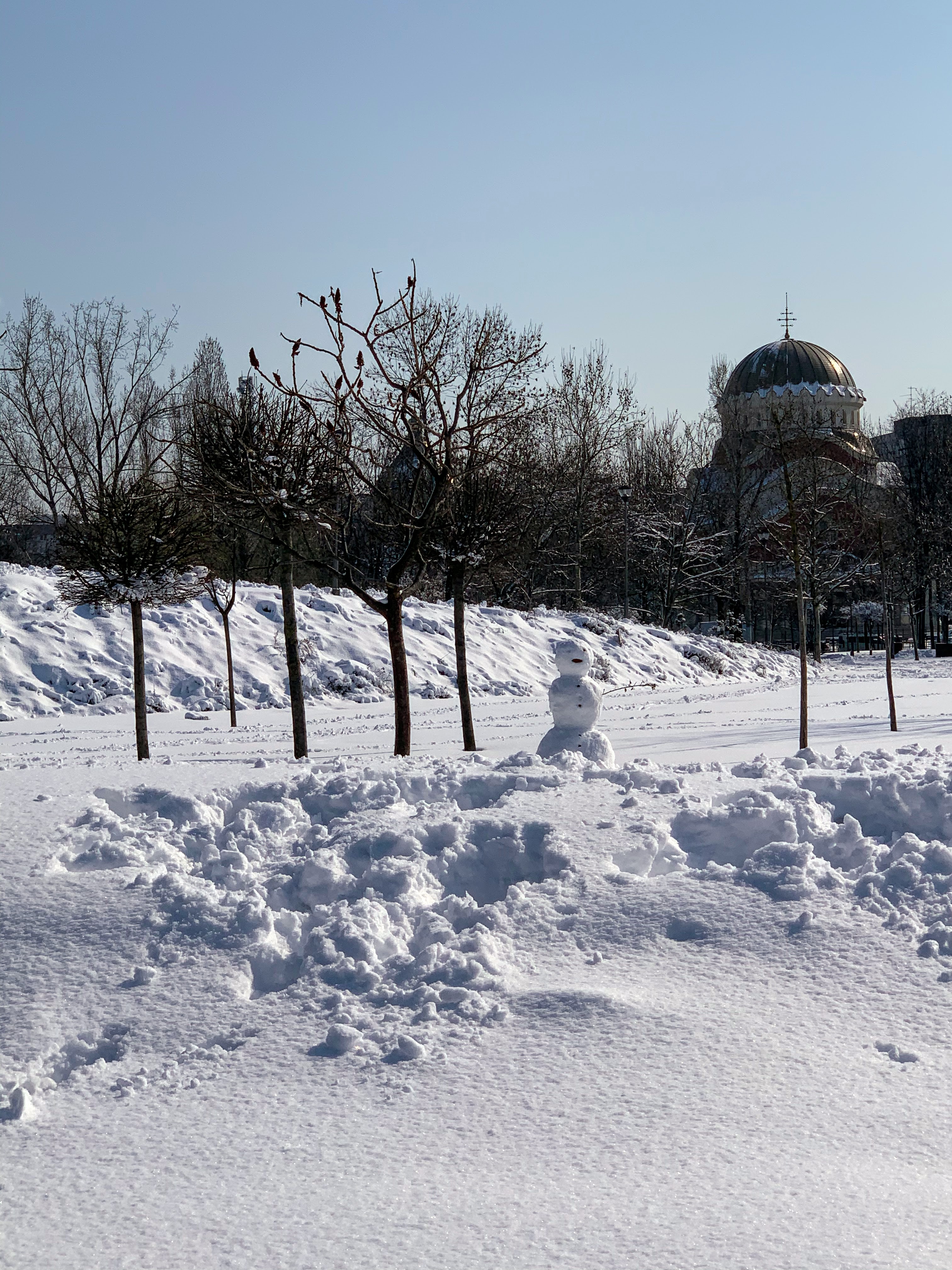 April: This was probably the most stressful month of the entire year. Got my second dose of vaccine. Back home, Jo started packing up stuff and sending things home - including Rosemary. Meanwhile, the second wave hit India hard. Really hard. In between the overflowing hospitals, lack of oxygen, trying to get a RT-PCR test was incredibly hard because of an influx of requests.

Airlines changed their policy to have negative RT-PCR tests from 72 hours to negative RT-PCR test from 48 hours, upon arrival at the destination! I was having serious concerns about whether Jo could make it. I booked a second flight for the earliest possible time she could leave - the original flight was for May 1; I booked a second flight on Lufthansa for April 29, because I started seeing trends of flights being cancelled because of the COVID situation in India.

In fact, just 4 days before Jo’s flight, Lufthansa suddenly barred people from India from boarding the flights from India into Germany and Schengen area - even for those transiting via Germany. Since Romania isn’t in the Schengen, Jo could board the flight. There was also a COVID scare 2 weeks prior to her travel - the maid who comes to our house was in another house where some people tested positive. And closer to the travel date, we booked COVID test appointments from two different clinics, just to ensure we would get it on time (that’s the SRE in me kicking in).

And for good measure, we had a third option to test at the airport, but we didn’t want to take any chances. The redundancy helped. After many calls to determine if the tests were ready or not en route to the airport, she got her (negative) result just as she reached the airport, while the other clinic sent her the results after her travel. Thankfully.. she reached Bucharest amongst all of this! Never been happier ever than to see her come out of the arrivals. 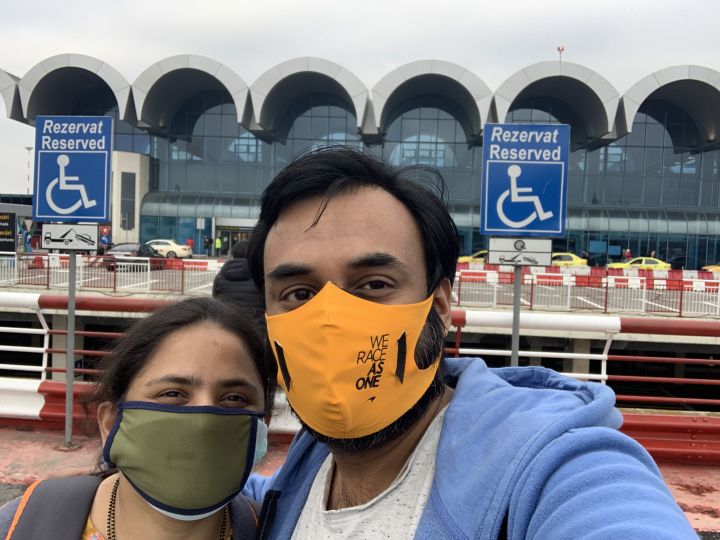 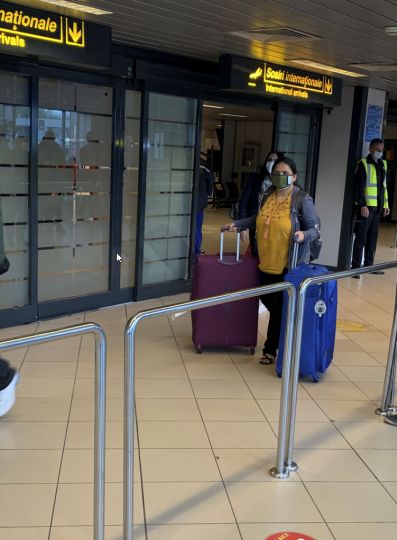 In midst of all of this, also helped in planning, organizing and hosting CDK Day.

May: Jo had a 10 day quarantine post entry into Bucharest, and once that was done, we started visiting some nearby parks. We started work on Jo’s resident permit and this involved a bunch of clinic visits to get a medical certificate. (To quote the regulations: the certificate should mention “clinically healthy and do not put in danger the public health”). Jo also got her first vaccination shot, and I felt at ease. 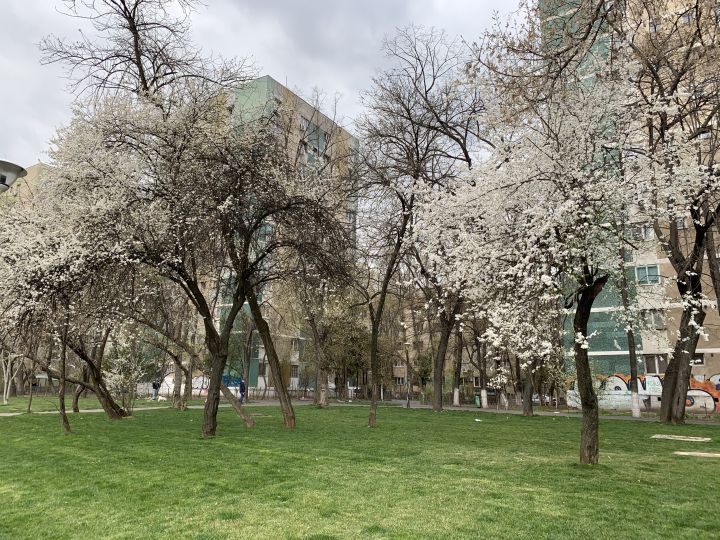 June: Jo finished her second dose, and we started exploring Bucharest. We visited a couple of Museums, the Botanical Garden and more. See the pictures over at https://pics.sathyabh.at/romania 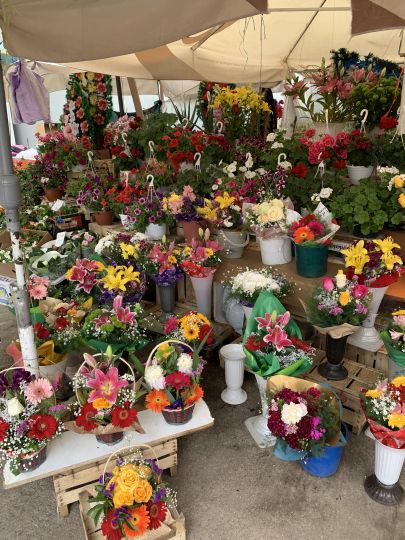 July: In July, we took our first holiday in Romania. With daily COVID cases going down to mid-double digits, we felt at ease in traveling. THe vacation started with a 3-day visit to the coastal city of Constanta. Not content with having to return to Bucharest, we made an impulse decision to head to Brasov to complete the week’s vacation. Check the picture albums from Constanta and Brasov. 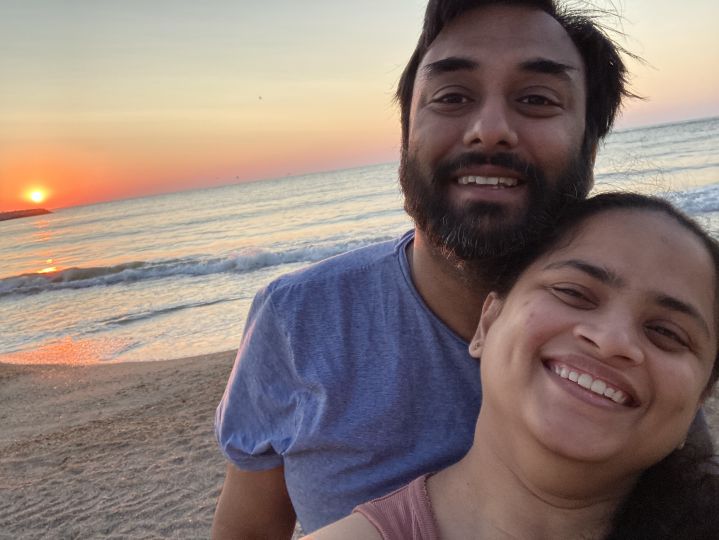 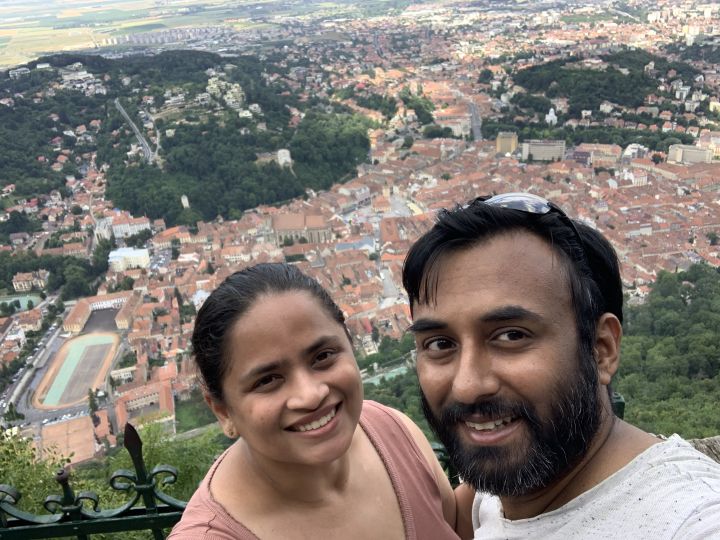 August: Was fairly busy with work, and started working on The CDK Book, the second edition of Practical Docker With Python.

September: Work and other projects like The CDK Book, the second edition of Practical Docker With Python, continued to take up my time. Not content with this, I started helping with organizing AWS Community Day South Asia. Started paperwork for renewing my EU Blue Card. 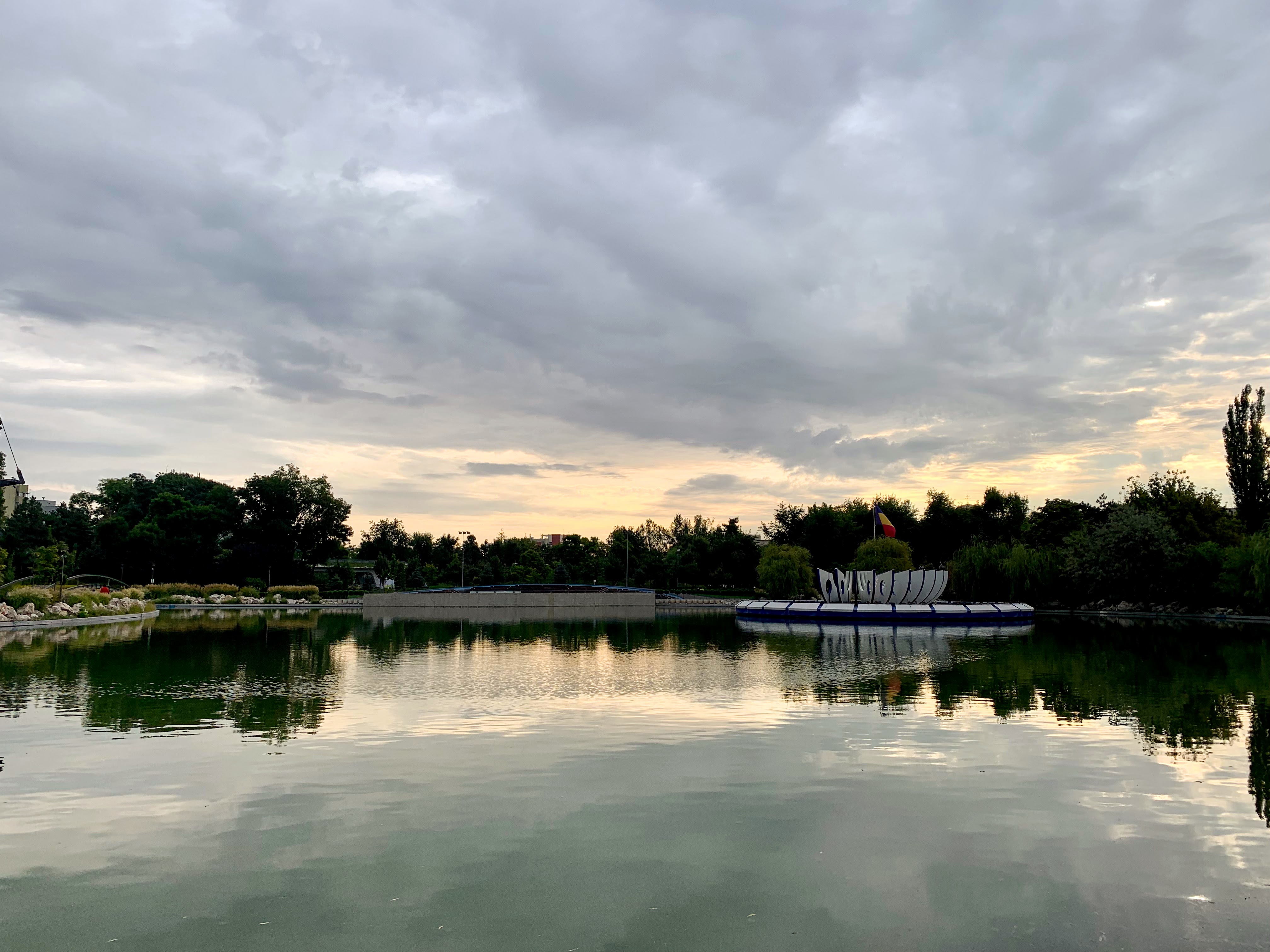 October: Finished work on Practical Docker with Python, and the AWS Community Day Asia happened on October 22 that was well received. Just my paperwork was being processed, and we were getting cozy in our house, the landlady of our house informed us to move out as they were selling the house. See this post for details. 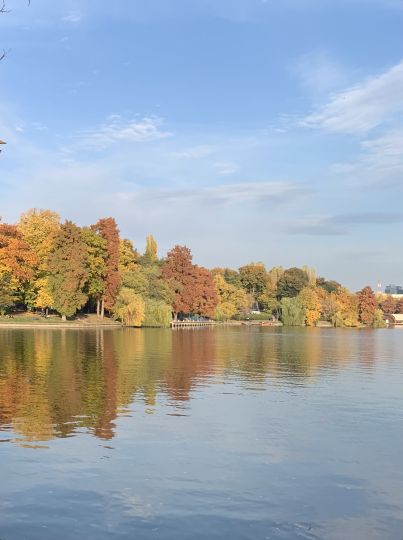 November: With re:Invent just around the corner, and no sign of my EU Blue card, I cancelled the re:Invent visit. This was kind of disappointing as I really wanted to be at re:Invent as we planned to launch The CDK Book. I gave a talk at JAWS Pankration 2021.

Going live in 30 minutes. Will be using the Pockettalk Translator that the @jawsdays sent to generate Japanese subtitles. Apologies it cannot capture my words right! pic.twitter.com/FUFK8fZJFY

With the Vegas trip cancelled, Jo and I took a holiday and visited Sinaia, and celebrated 8 years of marriage. See our Sinaia pics here.

Can't make it to Vegas for AWS re:Invent but I do get celebrate our 8th anniversary together! Week long vacation with @joshenoy begins with a 2 day trip to Sinaia pic.twitter.com/pPlUkLNwnA

December: My EU blue card arrived, or so I thought - they sent a resident permit instead. See this post for the details. The print edition of Practical Docker with Python finally hit the markets. Spent the Christmas and winter break by first getting my booster shot and then relaxing at home and couple of Christmas market visits in Bucharest.

Bonus: video of our Sinaia trip

Most of my gaming revolved around weekend Civilization 6 sessions with Aman. Later half of the year, I couldn’t find much time to play, but I put in some hours in these.

In 2021, in trying to get my mind off the anxiety of COVID and trying to get Jo here meant I picked up a lot of projects to keep my mind occupied. This year, I am looking at scaling back a little and just relax. Of course, I’ll look at supporting one or two events (definitely the next CDK Day) but mostly, I’m looking at getting my driver’s license in Romania and travel more. And of course, play more games and dust off my PS4 & the Switch.